Rant time, skip if you don’t wanna see my whine about internet strangers.

I’m normally pretty Pollyanna about how all the sexualties can get along, but then some earnest person posts this, on /r/bdsmcommunity, about getting the mainstream to accept kink.

Of course when I called him out, leave it to someone else to come up with an inventive (implied) rape fantasy for me:

Women are biologically physically weaker than men. As a woman, I understand that, and this is why I love being a Domme. But there is an argument to be made about the genetic psychological inherency of female submissiveness. That is obviously not for everybody, and in no way should that be a norm in a modern society (forced submission). But he’s completely correct – if YOU were taken and actually forced to submit in a third-world or tribal setting, typically you would submit or die. This still happens with women around the world today. You can’t view everything through the rose colored glasses of your cushy modern life. (AnonymouseDomina)

Yuck. I need a shower now. I hate that the OP is incapable of seeing that his stance is pro-rape and is hung up on defending not being sexist. Kinda makes me grateful for /r/femdomcommunity.

Though poor Chillbro22 provides an interesting launching point about talking about evo-psych and kink. He meant it as a way to convince vanilla people that kinksters (specifically male doms and fem subs) were more in touch with “real” sexuality.

They’re talking about this sort of scenario: 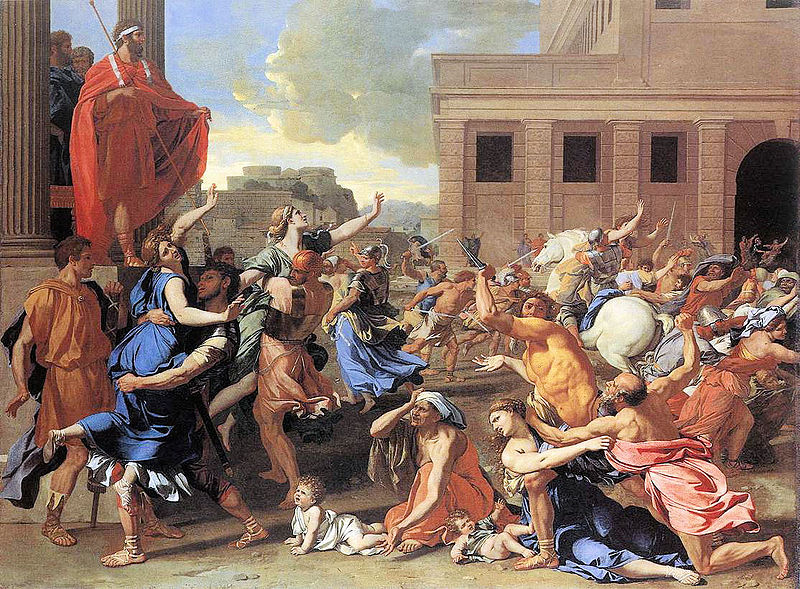 Allegedly the first Romans got wives by abducting a bunch of Sabine women. The story, and legends like it, informs popular culture, to this day.

It’s a popular idea for the M/f set, that D/s is simply returning to some sort of natural order. Gor fans tend to be particularly enamoured with this, and the books make a big deal about how the female slaves learn to be true women, and finally get emotional satisfaction now that all choice is stripped from them.

First off, in real life, real bridal abduction (not the highly ritualized kind) is a traumatic event that doesn’t cause a woman to go into happy sub space. Case in point: in Ethiopia.

The primal cave man walloping woman fantasy, outside of wanking, is shitty for a social model.

For example we know that throughout humanity’s history, and among other species, non-procreative sex occurs. In humans it occurs more than procreative sex. Even in a straight people fucking scenario, we take nine months to gestate, and lactation gives partial ovulation suppression. Most conceptions miscarry, or fail to implant, and humans fuck twelve months a year, every hour of the day, whether they are ovulating or not.

It might be perfectly possible the human propensity towards rape influences our kinks. I have no issue with that. But reductionist arguments glorifying a sort of problem that is ongoing today (ie the abduction of girls to be bush wives) to justify male-dom and the claim that the past was some sort of M/f buffet is fucking bullshit.

History is not a simple narrative of warrior kings and simpering princesses being passed about as property. This particular problem with historical narratives is that it in no way reflects the rich range of human expression and how we can order our hierarchies in many ways. I’m not, incidentally, even talking about societal matriarchies. Even in some of the most ghastly, sexist times, women have had power and done shit. Humans are a bit more complicated than Man 1st, woman 2nd. For example the initial European colonization of Canada was funded as a religious charity project by French noblewomen. Very tribal/family oriented cultures are infamous for putting women in positions of power before they will give the role to an outsider. Some theorists point to the “all men are equal” thinking of the Enlightenment as a period that actually took some rights away from women as they moved away from hereditary power. “Men in charge” is not a perfect rule.

But that’s neither here, nor there, as the problem with the “natural past” hypothesis is that it presupposes that we are not natural now or that we were instant Savannah transplants who went from chasing down herbivores with pointy sticks to suburban commutes. Panties are not something that occurs in nature, but plenty of people fetishize the shit out of panties. If people fetishize rape, it is just as likely they are doing it because people are being raped today, than because people were raped in the past.

I wouldn’t “submit” in the D/s sense, because I’m not a sub. Sure any damn fool can beat and torture compliance, but any bully can bully a man too. Hell, I have it in me to be a domestic abuser. And if you think for one minute I have lived in a world free of sexualized violence, you have not opened your eyes to what modern life is like.

As demonstrated in the Ethopia article- women are perfectly capable of organizing against the behaviour. The ability to make the best of a miserable situation (one where you are beaten for complaining) is not really the same thing as D/s, nor are we kinky because “Grrr, caveman!”

I'm the admin, and writer behind this blog. No you cannot hire me to dominate you. :)

4 thoughts on “Evo-psych? (And ranting)”