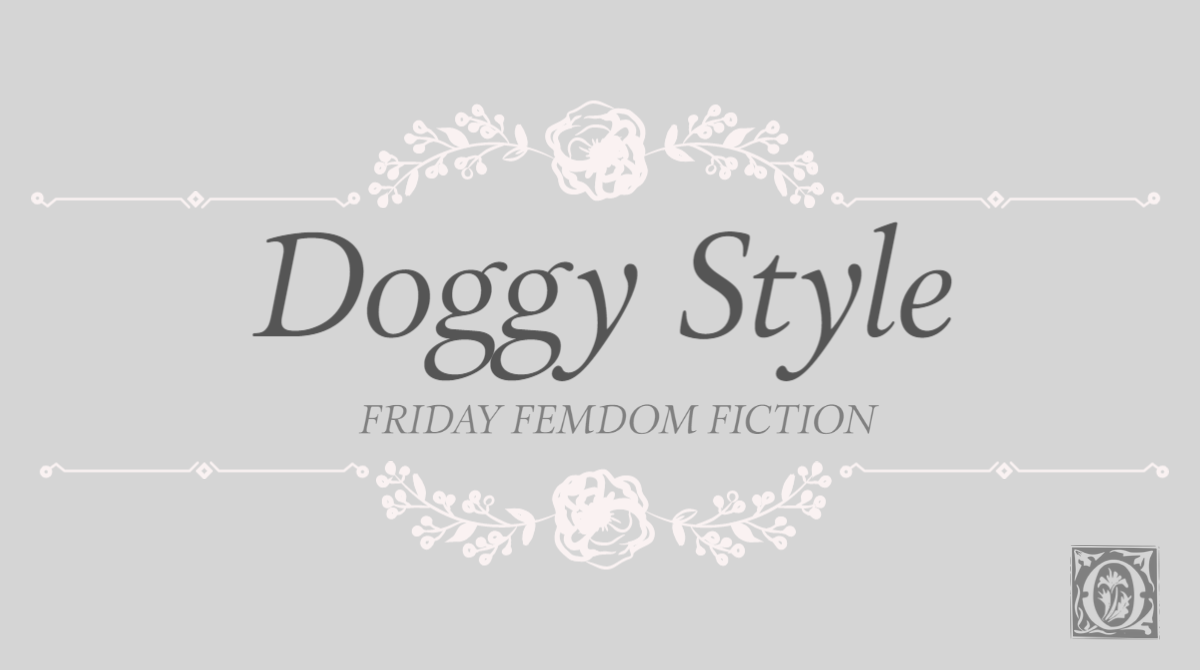 She rolled back, butt towards her heels, arms unbending so her head is low and her hair pooled on the floor. She looked back over her shoulder, at the anonymous effect of the leather mask on his face, and the line of the lead pulling taut from his collar.

He was hard for her, want etched across his body, her posing holding him enthralled, tighter than the lead. She’d stripped him, earlier, teasing him about his eagerness to rut, telling him he was like a dog that had scented a bitch.

That was a loaded word. Bitch for her: harsh high and unfeeling. His occasional wearing of the label: lowly, desperate and needy. This time she taunted him at how much he wanted to fuck, told him he was little more than an animal even as she jerked his cock.

Words tugged at him as she squirmed against him and crooned in his ear to admit it and say it out loud, that he was her dog, nothing but an animal, brainless, desperate, and her cunt convulsed as she pressed her thighs together.

She made a show of presenting the mask to him so he could see the black snout and pointed ears, a shape she thought was more doberman than anything else. She liked the fit, the way he looked at her through its eyes, hungry, humiliated and yet wanting more.

She made him pant for her. No barking, she didn’t like the abrupt sounds, but growls instead of groans while she buckled the collar and led him, from the chair, across the room.

He saw her shed her clothes, what little she had been wearing when they started playing and the revelation of high, small pointed breasts, and a heavy roundness to her ass that tapered to the tight pinch of her waist.

Tugs to the leash pulled him closer before she settled into position, dropping to her knees with grace, and then all fours with her elbows bent. When she caught his eye the pose extended…

…And he had a direct view of the split of her body, shameless in her power. She giggled, “Caught my scent, did you?”

Her cunt was a wet dark slash. Brown lips around dark pink, glossy. The leash tug told him what to do next and the mask let him tilt his head to press his real mouth to her. It was more nuzzle than lick, at first, getting himself marked with her.

She smelled of musk and tasted of lemon and salt, but soon this treat was pulled away from him and his leash was yanked.

He knew his part and her intent, hands to her sides, cock pressing, letting her own back writhe and the slick home it to hilt. Hot, just the space for him and not more.

His fingers dug into the softness of her hips and her command encouraged, “Fucking rail me.”

And she used him, devouring that energy as he drove into her.

She didn’t count the thrusts, making cries into the floor, welcoming triumph. “Harder!”

Her taste was still in his mouth and his sweat starting to bead. Her hand hand slid to reach back and tweak her clit.

“I’m going to c..” He tried to warn. Wild pounding thrusts gave him little leeway, her clear enjoyment even less

“Dogs don’t talk!” She grunted. And then her attention was elsewhere as he felt the clench and squeeze of her coming. Something about the spasm of muscle pushed him out and her forwards, but then he came in a single spurt he couldn’t stop, and a second pulse, a white line across her back and another dripped from him and across her sprawled thigh below him.

From the floor, in a c curl, with him collapsed nearby, she took a breath and sighed out, “Good boy.”