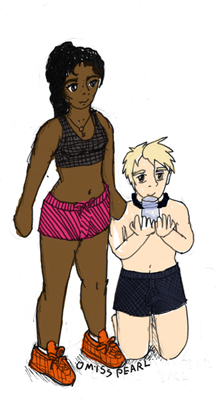 [Coming home soon. Prep for me.]

Now, with her warning, he stretched and swung his feet over the side of the bed. Pausing to flatten the covers into some semblance of tidy, he headed down the hall to the kitchen. He knew what she’d need, and without being told, he took down one of the big water glasses from the cupboard, filling it with water and a handful of ice. After an exploratory flick of his tongue in his mouth and he left the water on the counter for a minute, while his teeth got a quick brush.

Minty mouthed, he rushed back to the hall and took his place in front of the main door, holding the glass of water in both hands as an offering. He heard the stairs, then the pause where he knew, on the other side of the door, while she unclipped her key from the strap of her sports bra. The door opened and he drew in a breath of air in anticipation.

She was dressed in brief shorts that failed to contain her fullness, and the solid squeeze of the spandex gripping and holding her chest. She had both hands full, one with the key, the other clutching her cell phone. Her dark hair was pulling a curl from the humidity and her own heat and dampness, while her cheeks carried the blush of fading exertion.

As she always did, she paused to admire the view. He felt a rush of pleasure at being able to make her happy.

“Hey there, cutie.” She took the glass and gulped greedily, a little exceeding the containment of her lips. With the water drained, she set it on the hall end table next to the mail basket and put her key back on its peg.

“Did you have a good run, Mistress?”

She smiled and pointed, with a nod. “Phew, yeah. Undress me. I need a shower.”

He slid from his knees to all fours and hand walked to her, keeping his head down. She had slim, long legs, white with tapered ankles and creamy thighs. She liked to lace her trainers on tight, pulling each cross of cord snug before tying them in a neat bow. Now he kissed the tops of her feet, before prising at the knots.

She used the wall to steady herself as he tugged each shoe off, nuzzling them. She was shy about the fact that he liked the scent. When they first started dating he had to reassure her that it wasn’t dirty. They smelled of clean sweat, carrying the scent of her, and intermixed with the laundry soap from the socks he was thrilled to be able to peel off. It was a smell that went straight from the nose to the brain without really giving room for comparisons- he associated it with sex and closeness, and of the power that was wrapped up under her skin.

Her freed foot was tinged with pink- they tended to swell in the summer and chill into snowy whiteness in the winter, but as always the solution was a loving massage, firm squeezing from the ball of her foot towards the heel. She made a noise of pleasured comfort, and his anticipation got a tinge of arousal. Daringly, he gave her bare foot a kiss and then extended his tongue, licking her sweat.

They ended up sitting on the hall floor, with her pressing her damp sole against his face. She had long toes, high arches that demanded extra cushioning when she ran, and kept her pedicures practical: short nails, and just enough abrasion to make her heels smooth without losing the protective callous.

She gave a playful wiggle of her bare toes and he continued to work to loosen the tightness, stretching and flexing. Eager to do a proper job he tended to her ankles as well, then up to her calf. His mouth followed, and soon he was nibbling at the inside of her taut and muscular thighs.

“Distracted?” She’d combed her fingers into his hair, to get a grip and guide his head, a caress as much as control.

“No Mistress, taking the proper reverence you deserve.” He said it cheekily, but he meant it.

Nonetheless, not to be derailed from her assigned task, he paused to pull off the tightness of her sports bra, freeing her breasts. Her shoulders wriggled as she relaxed from their stricture. The bra left furrows- she liked them as tight as her shoes- and he placed careful kisses on each mark.

The line of her ribs was a series of valleys in shadow, bone under a suppleness. They too felt his mouth. He tasted the sweet burn of the salt, as his fingers slipped into the waist band of her shorts and panties, pulling them off in one smooth tug. Her belly had a valley down the centre and jutting bones beneath that peeked from her hips, but a hint of roundness over the muscle like a ghost echo of her breasts.

His kisses and small licks began on her neck and made little forays down and down, favouring the places that made her writhe and pull towards him.

Her cunt was wet enough to soak him down to the wrist, but as much as his fingers went in easy, they gripped like a hungry mouth. He knew she liked the rough-soft contrast, short, filed nails but firm knuckles, angled to massage all those swollen places within herself.

She let go of his hair, only to grab his collar instead. “Get hard for me, we’re going to fuck before my shower.”

Phew- this a little fantasy of mine from many a morning run. Just typing this out is enough to make me want to get out for a sprint.