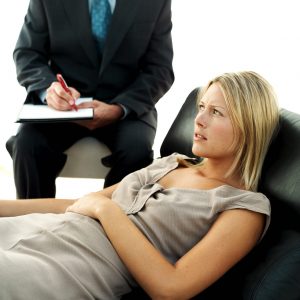 This is not an advice post, it’s a sharing post, partially just to make sense of my recent experiences. I’m dealing with a generalized anxiety disorder, and have been for a long time. Some of this is hereditary, some of this is situational damage from some less than idyllic life experiences. As a result of this, I actively pursue things that help make me mentally healthy and one of them is therapy.

Being kinky while getting help from medical professionals, particularly mental health professionals, is an experience that can go many ways- some are well educated on the subject, some open minded but clueless, some have trouble not seeing it as a pathological hangup or a part of your overarching health issue. One of the biggest problems with coming out to your therapist is that you often have to engage in BDSM 101, walking your professional through what your kink is, and how that fits into your life choices. Human sexuality is a poorly understood field of psychology, one where we only discovered the internal structure of the female clitoris in this century (wtf guys), and pop psych writers leap on and working hypothesis and try to cram it as hard as possible through the filter of cultural bias. Thus, even at the best of times, your therapist may have picked up some odd ideas. Sometimes I feel like we’re way overdue for some sort of established manual of care for the kinky to distribute or something.

In theory you could dance around the subject matter and not disclose, but when you are for example, discussing healthy relationships, keeping it in the abstract and carefully curating your description of your life is a challenge, if you want to make meaningful progress. You don’t get a vacation from your problem in the kinky parts of your life, and as they are often some of the most precious and special things to you, it’s likely that you will have to say “Oh, btw- I’m kinky!” at some point.

In my situation, I also really hate that, as a person who has dealt with abuse, it’s an all to often automatic assumption that your kinks are related in some way. All to often abuse survivors into BDSM have people attribute that kink is the filter by which you are experiencing what would otherwise be “normal” (vanilla) sexuality. For me, my kinks pre-date my experiences with abuse, and on the contrariwise to the idea of association and imprinting, there’s a whole cluster of things like incest/age play that are personally NONONONO hard limits precisely because they are too close to bad memories, but at the same time I perform plenty of ostensibly vanilla (I’d like to think of them as ‘kink neutral’) things within the spectrum of my sexual behaviour. To be clear about what I’m into: I want to be a dread empress and play no-pants cops and robbers, not do some sort of catharsis in the bedroom. Hell, my abusive ex had loads of submissive fantasies- wanting to be tied up and fisted by ‘force’ does not preclude you being a belittling rage machine. Dealing with the aftermath child abuse does not mean you use BDSM to relive it or protect yourself from reminders of it by being weird, like the god awful sister myth that rape turns a woman into a lesbian.

And, when you establish that BDSM is not a coping mechanism you need to be rescued from, then there’s the fun of sorting out sexual orientation VS crazy. I’m a dominant, which means I get emotional warm and fuzzies from control. I’m also anxious, which means that my personal brand of cray-cray likes things in control, clearly explained, etc… Oops. You can see the possibility of hard to express boundaries. Now, try talking about your feelings with someone that you had to explain kink to in the first place, who is specifically applying a professional outsider perspective for the purpose of recovery. Having to spend time arguing “no, that particular thing is healthy, it’s this particular thing that causes me distress” is a waste of time you could spent in recovery.

Extending that point, and the problem of people treating it like a comping mechanism, being kinky with an emotional issue that influences how you interact with the environment also means it’s very easy for therapists to conflate the two. I don’t doubt this is not helped by the cliches of “blah, blah, Alpha in real life but I like to give up control sometimes”.  Being dominant and discussing being a control freak is hard, and it can be very identity traumatic to have to wrangle the assumption that you are just bent this way because of your unhealthy mind patterns. Of course I could choose to simply disregard any kink related advice or iput.

But the reality is that my GAD gets in the way. It makes me less brave about new experiences, less able to enjoy D/s and to be honest, unhealthily closed off from trusting partners. Being a dominant, while relatively physically safe, is emotionally vulnerable because you are counting on a person to be extremely responsive to your needs. It’s actually really hard to relax and enjoy the service when there’s a little voice yammering away about how you need to be prepared for a crisis. It also certainly kills my artistic career, as my confidence erodes, projects go unfinished, emails unsent, and so on. Oh, the things I could accomplish if I wasn’t wasting mental energy on splah! Proper care means getting care for everything.

Letting go and being better means trusting subs to be able to make me feel dominant. It means opening myself up to my kinks instead of assuming people just can’t handle it. It also means anxiety around my public image because there’s a third myth that dominants need to wrestle with, the Teflon True Dom. That’s the one where you are immune to bad shit because you are dominant, like some sort of sexual Calvinism where the universe shows its love for you by making people in a non-kink context stand out of your path and for you to be completely emotionally self sufficient.