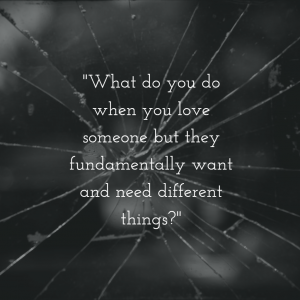 The whole process of my breakup is not done. We are still in awkward close quarters, negotiating the logistics of the seperation as we each move into our own household. Lots of crying. He took a week off work to grieve and has been pretty much high half the time. I have tried to get out of the house more and took up archery.

I have developed a sort of insomnia as well, a rarity, and stay up late writing this. What have I learned?

This isn’t a post mortem, but a trans-mortem. Things are still going. Or rather, still falling apart.

What do you do when you love someone but they fundamentally want and need different things? Obviously breaking up with Wildcard was not a choice I made easily. This blog contains a detailed description of much of the ways I cared (in sticky intimate detail) and because of it, I know that we developed a reputation as the cute couple.

Literally everyone but my closest friends were shocked as hell to find out we had a problem. Mrs. Castle was probably the only one who called it, but Mrs. Castle probably has the broadest perspective into my life.

Functional issues stemed from being his rebound after a really horrible relationship. Hell, not rebound. Rescuer. For me, I was inclined to focus on helping and patience because I knew we had a problem, but I trusted his belief that it was a him problem I just had to help him through. I don’t think it is a problem anymore, just his personality and preferences.

I got what I deserved. I am the woman who barreled into his life and dragged him out of self imposed hell towards the life he wanted. Only the life he wants is not the one I do. It is a fuck ton more poly and switch focused than really is remotely compatible with me. Oops.

About a year ago I accepted it wasn’t going to get better. Then it was if I could live with it as the price of admission. I looked about for other outlets. It… Did not help. It made the dissatisfaction worse. The enthusiastically waggled penises of dozens of men looking for something other than service topping provided a stark contrast.

I don’t think he was ever into me sexually like I wanted. That stings.

A part of me feels like I just blew up a great thing out of being too picky, because Wildcard is loving, kind and generous.

Maybe in a smaller, less people’d world we would have been ok and I would have sucked it up and dealt. But also I was starting to wonder if resenting the missing stuff and the stuff I hated was healthy. I try to have perspective that 100 years ago, I would have 8 kids and polio, but it doesn’t help.

So I told him I wasn’t getting what I needed. And… Cue the sadness vortex.

My life is now apartment hunting and furniture logistics. Everything upended. Everything examined now “do I really need this?” From clothing to volunteer work, it is one non-stop rip down.

I don’t know what the hell I am doing. I am scared and unhappy about the chaos. But…

I would rather end up a bitter old maid than end up resenting him for something that isn’t really a flaw. And actually some of the change is not so bad.