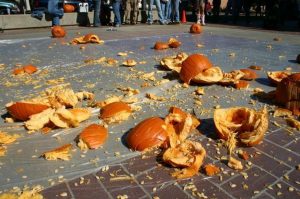 It’s November now, which for a Canadian is a month of nothing (our Thanksgiving was last month) and a lot of nostalgia for October. This year, Halloween night meant a private party hosted at chez moi, with select guests of a very particular nature. Kinky and fun – everything you could want. Also I made banana bread AND german apple cakes.

Of course I have a strange feeling you’re not reading this to learn about my culinary offerings, so let’s talk about the party and how it came to involve quite the spooky, sexy success…

While Montreal has many play parties, I’ve been enjoying my status as scene royalty which means being able to hold my own events and have a reliable chance of people actually showing up. Honestly though, I left everything to the last minute even my costume.

Delacord has some very specific fetishes. As well as an extra special attraction to silky dresses, he really loves the pagentry of a beautiful (fictional!) death. So for him it was a perfect opportunity to go as a hanged witch, noose, hat and all. For me it was a chance to try something way, way out there for me.

A few months ago, Wildcard installed a hard point into the archway that separates the living room from a dining room area. It’s a nice sturdy metal ring and it got put to use several times, alongside the special wrist suspension cuffs: 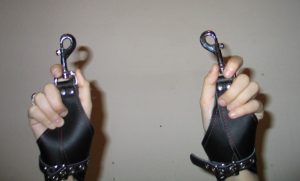 (Wanna have someone put their weight on their wrists? Contrary to every bondage illustration ever, simple loops or cuffs will fuck up your circulation and nerves, cutting down on the fun you can have, so try something like these to distribute your victim’s weight evenly and let you restrain them safely for longer periods.)

These got put to use first to let Wildcard go to town on the gorgeous Synadide, leaving her behind a deep bruised colour and a contented smile on her face, and then later on Butt Massager when he got pounced by several women, myself included, for a vicious sensation and tease scratching session. But for me I got to engage in a little edge play.

I’m not personally into snuff- even ignoring the moral implications, I just find it doesn’t do anything for me. Nonetheless I’ll try anything once and if there’s one thing  do like it’s pushing buttons.

Breath play is never going to be 100% safe, but with care, supervision and precautions you can dabble a bit.

Delacord stood before “her” audience.  The crowd watched as she curtsied and then her arms were locked behind her wrists in harsh steel cuffs, only her elbow length satin gloves protecting her from the bite of the metal. She was made to stand and the noose slipped over her neck, bound, proud and awaiting her end as the executioner carefully freed her hair from the cord so it could lie against her bare neck and set her hat just so on her head.

After another moment of anticipation as the executioner stepped back there was a tug and the noose pulled taut, squeezing her neck. This wasn’t a quick, short drop, but the liesurely, close to the ground sort of hanging.

After about thirty seconds, the bottom, who was in no danger gave signals that they had enough, and I released Delacord. Protected by the sensible use of an extra knot so the noose couldn’t actually fully constrict, as well as never being in a position to put his full weight on the rope- plus a great deal of observation on the part of the top, presto, simulated hanging.

My encore performance was much more a matter of pantomime. After letting Delacord down and checking in with him, a conveniently positioned hassock  made an improved block, matched with a plastic ax. Kneeling with neck just so, I went through my usual pagentry while the waited, and there was one perfect moment just as the ax smacked into the back of their neck.

That’s the kind of connection where you talk about time suspending. Instant dom space, a hook lodged in them and pulled hard, tugging them where I wanted to go. The actual games were playful and about as threatening as getting shot with a nerf dart- but sometimes it’s a pure pleasure to nail someone so hard in the soul you feel like you can’t possibly have done better on the dom front.