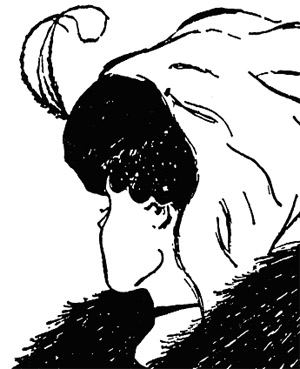 For me, the paucity of female dominants creates another problem. Specifically  as much as I argue against the idea that a mentor is a requirement, scarcity allows for definition of the role by the few, and this is a role with very few people in it indeed, the most vocal of which are paid to dominate.

So from the outside, way back before I got heavily involved in doing it, the whole thing looked, not like a barrel of fun and horniness, but somewhere between goth playboy bunny and indulgent girlfriend.

The pageantry  protocol and fetishware do no help to an outsider- while femsub gets constant reinvention (even if standards referenced by The Story of O still hold pretty fast for something first published in 1954 and translated to English in the mid-sixties). There is also, paradoxically  a lot more agency of actual women in building the fantasy. Gor might have been the wank of a male philosophy prof, but everything from Story of O through to 50 Shades has a female author getting her wank on, and one mustn’t neglect all the stops along the way in the highly fertile genre of romance, heavily seeded with women writing for female consumption.

But what about me, a dom?

Of course there’s some exceptions. Cat woman has earned herself an anti-hero hat, but still gets to purr over a supine Batman from time to time. But usually you just don’t have those sorts of options, getting a glorious bright flare of malignant power before the hero snuffs you out and skips off to something tender and sweet. Unfortunately it becomes tangled up with the good/bad girl stuff. On the flip side, male heroes get a fuckton more sexual aggressiveness permission, up to, during the rape-y 80s period of romance writing, violently violating the heroine as long as he promised not to do it again by the novel’s end. They get to kidnap her (plot convenient either to save her from something else or as a hostage taking scenario that he later recants), act like a stompy hyper-impulsive toddler and shouting “X is MINE!” is supposed to be romantic. I’m sure there’s some exceptions, and the modern heroines are getting to be more and more capable in their own right but…

Fiction does not deliver dominant women with much to look forward to. We seldom get the boy. We are not supposed to be tender. “The Proposal” is the closest example I can think of as a counter point, and it again suffers from hell bitch syndrome- she gets to keep her boy after the zany trope inverting plot, but I somehow think she lost her coffee bringing service sub and she had to have her corners knocked off.

It probably doesn’t help that the distaff side of most things is dubious- romance as a genre generally makes heroines a bag’o traits the reader can feel comfy in while she goes and has adventures that culminate with a hero to snog.  She might have shades of femsub, but she is going to be Cinderella and Win At Everything- these stories always end with her being a princess- but an under described princess who’s pretty darn interchangeable with any other genre heroine most of the time. But it’s pretty hard to win by being dominant in these stories. You win by assembling your forest friends-esque helpers who adore your sweetness.

Which brings me to where we came in: the actual women who are kinky. When I was very young and first trying on having a sexual identity, which is one part dress up and one part hand tailoring, raiding the archetypes and examples that were available to me sucked. I honestly thought, in the way you don’t really take the time to conceptualize things, but function on half baked assumptions, that professional dominance was the female version.

And yet- No bloody role models for people who are not sex workers. And this matters because it matters where you are going when you decide to take on a role. The internet, of course, has been a real blessing to kink. While there’s always been freaky buggers getting off on all corners of the planet, everything has exploded since we can find each other for more than just fucking (if you were lucky). In the past, you basically had porn and alt weekly ads- now, from the newsgroup we have evolved into web forums and social media sites with a much heavier number of amateurs at play.

The upside is that there’s finally women just like me writing about doing it in a way I can access. It’s an island right now, not a monolithic continent that way that chicks-in-rope/femsub is, but there is something. I’ll still be cautious about trying to have just one role model and encourage diversity of voices (even the pros) but it feels a lot more comfortable to have other women doing this too, without the eventual idea that the best thing ever is my own professional dungeon space and devoted clients buying my panties.