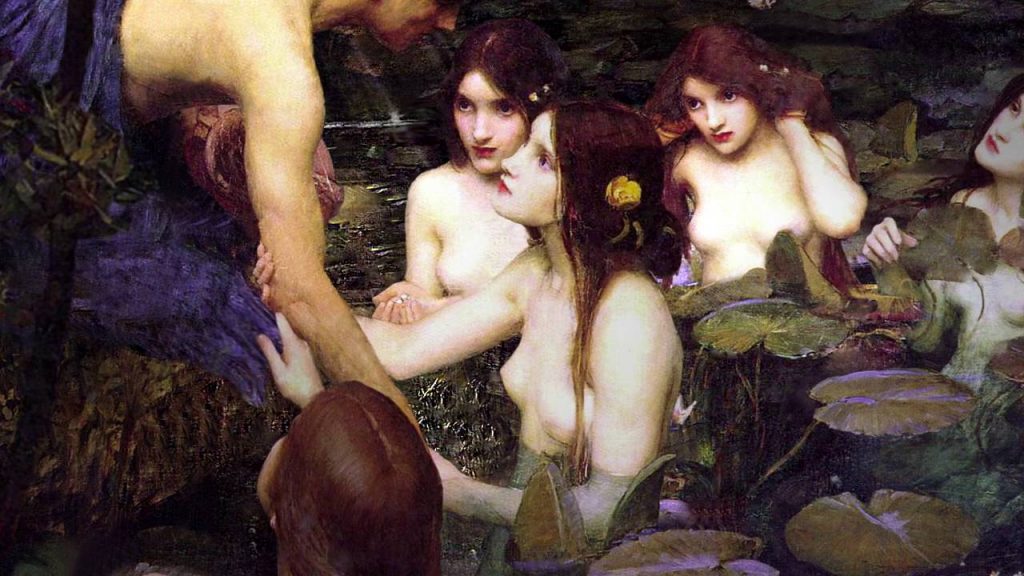 Writing about the influence sexual media has on sex is hard to do without tut tutting.

I don’t think we’re very good at acknowledging the flow of sex-as-a-conversation  without bringing in mortality. For example recently as a think piece, Hylas and the Nymphs, by Waterhouse, was removed from it’s place in the gallery it lives in. I think it’s a beautiful enough painting I put a print of it in my bathroom. It is, however, a pretty good piece to use for the conversation about why great art so often means shit that gets a wealthy straight male audience off and we value this sort of thing so much we don’t think particularly hard about trotting people we want to be educated past glorified excuses to look at idealized titties.

I’m going to go against the grain and make a statement:  Sex is supposed to be performative.

For example, a performance: Brick likes mouths a lot when we have sex so there’s a particular maneuver I do where I lift my head a little bit to flick my tongue over his nipple while getting my long dark hair out of the way that really Does It For Him. Why? He learned his nipples are sensitive from a past partner with outlandish oral skills, but who knows where she picked up the idea of putting her mouth on nipples. No single sexual behavior is universal across all humans.  It didn’t occur to him to ask her to do that until she put her mouth there and from whatever source she learned it from, now I get asked to lick because we’re smart adults who can talk about desire.

Why am I going to the trouble of slightly angling my neck so her can see my tongue pull over his nipple? There’s a diagonal perspective where I can watch him react to what I am doing and if I get it just right, his eyes take on a haze I find incredibly sexy.  Although I like his penis and this act is usually accompanied by him with is clutched in his fist wanking into the general area of a potential orgasm,  the social and psychological aspect of sex means where we put our eyes and the emotional intimacy is a huge part of this.

When we try to talk about sex, it’s such a big topic that bits and pieces get left out.

The internet exploded the community around having sex, by allowing disparate people wealthy enough to afford a connection the ability to access material for titilation. Everything about the modern BDSM community is not, despite what some people wanking themselves into a coma will tell you, the work of Old Guard guys, although they were a culturally relevant factor, but the newsgroups crawling out of the medium of safe communication behind usernames and into the first “Munch”. Which, btw, was organized by a woman. But the other side effect of internet connectivity was a golden age of relatively unfettered access to sexual materials.

This is the wrong conversation- excepting naked imagery produced in the absence of consent, which is a separate issue to image content, the idea of toxic art is pernicious.

For instance, we live in a culture that penalizes being fat, and prioritizes being skinny. Good work is done to help people who are not skinny feel sexy. However, cultures that are fat dominant in their aesthetic are not any less oppressive.