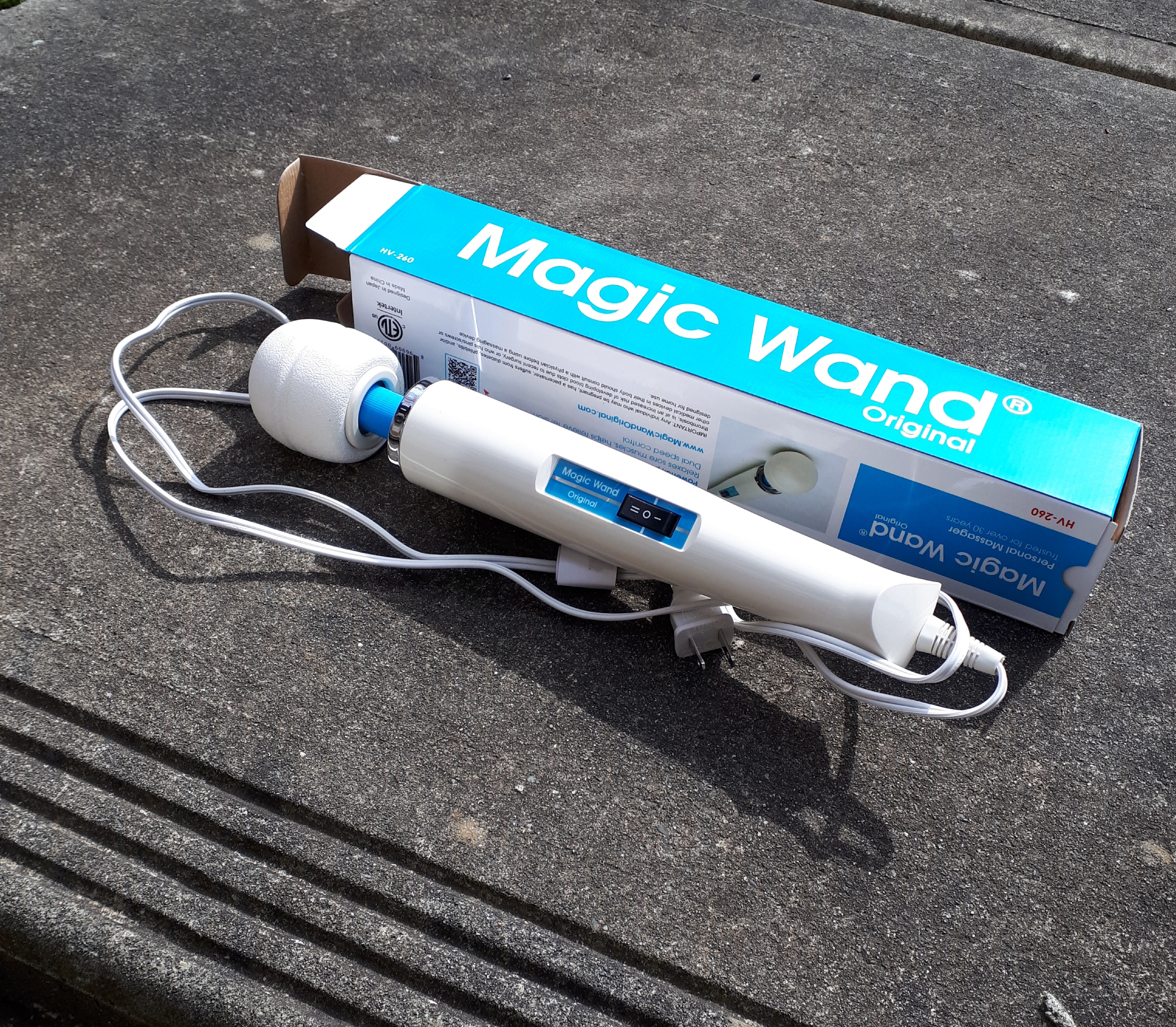 I just ordered not one but two Magic Wands, the workhorse dependable of the sex toy set, one for me and one for a friend. There’s some standards you get used to, the rabbit (really not very trendy anymore), the Aneros, a bullet vibe, a vibrating cock ring, the CB(whatevernumber)000 in all its ugly clear plastic glory. But, if I could only have one famous sex toy it would be the Magic “stop calling it a Hitachi” Wand. The Magic Wand is just so standard it would be hard to have modern sex and not be aware it exists.

In makeup, they make a big deal about products that get branded “holy grail” or “ride or die” or whatever hyperbolic nonesense you want. The video game version is calling things iconic. Sex toy review haven’t as obviously come up with a cliche for that (although the intelligent snark in the blog genre is well worth a read, I’ve scattered the end of the post with a few who’s whos and invite you to share your favourite reviewer in the comments). In the sea of items that humans have created to get off with, The Magic Wand just is. It’s a platonic ideal of a sex toy, so standard and effective that even porn uses them with a more casual attitude than lube.

But after all that puffery: They don’t really work for me as a sex thing, but I use them happily with partners. I could skip them in the bedroom.

So, let’s review this supposed miracle of plastic and wire!

The Magic Wand is ugly. White that can eventually age a bit, with a big chunky control switch and meaty head, if it didn’t have such a legacy as a sex toy, it would look just like the vintage wellness appliance it was created to be. Hitachi’s little embarrassment, its popularity is such that they have a love/hate relationship with their product. On the one hand, incredibly profitable, on the other hand, even to this day Hitachi is synonymous with vibrator the way that Kleenex is with facial tissue. Since people are understandably shy about sexuality, wanting both money and anonymity, their subsidiary Vibratex took over.

Aficionados tell me the Magic Wand got a slight change for the better during this period, more strength, with a lighter body. These improvements are welcomed, but are about the only updates it has received since its debut in 1968. There are great grandmothers (and great grandfathers) extant who got a good buzz out of this toy, but it generally is considered to sit at perfection.

Instead the market is full of knock off and imitations of the design. Most of these are disappointments, except for augmentations like the “Doxy”, which simply blows its muse out of the water for pure power, and is the pounding vibration favourite of many. But if you don’t have almost a hundred or so extra dollars to throw on the earthshaker version, you can get the Original Magic Wand for about $60 US.

Everybody has heard of a Magic Wand, reviewing it feels almost redundant.

The Magic Wand is so common, if you want, you can buy special nubby hats that go on the meaty bit, from a wide bunch of manufacturers. I wouldn’t bother, the Magic Wand’s main strength is that it turns virtually anything else into a vibe, from his thigh (straddle!) to the butt plug you have poked into him just so.

If you are going to share it, the plastic head of the Magic Wand is probably one of the draw backs- it’s not going to give you cancer, but not only does it yellow a bit over time and take smudges (the worse being when I used one to vibe a steal cock cage- lesson learned, although the guy came because cock cages are not very effective. Put a large sized condom on it and laugh at how silly it looks. Phhhppppplllllttttt!

I, alas, can’t get off from vibrations. An up/down motion does it for me with very firm grinding, so while I have used them as a sexual enhancement, alas I remain bitterly jealous of all the cooing women who touch it to their clits and BLAM, orgasm. All I get is sensation, followed by numbness.

The place this toy shone for me is discovering how much of a cheat code it was with partners. Lube up his dick, cup in in your hand and rub it up and down the shaft. Boom, ropes of milky come everywhere. At a play party? Press it to her crotch through her panties and have a couple of friends hold her arms. Whee!

Then, when you’re done, swab it down with a bleach wipe like it’s a piece of gym equipment. It sure looks ugly, but boy does is do the job it is supposed to (on most people). Heck, be a sex party hero and throw and extension cord into your bag.

I use the Magic Wand for its original intended purpose…

I hate to be NLOB (not like other bloggers) but this guy will never, ever be my own personal orgasm factory. Despite this, I had to get it.

I get migraines about monthly, biweekly if I am not taking good care of myself. They range from merely obnoxious, giving me days of fuzzy headedness, to accute, evening long sessions of screaming pain where I end up in the bathroom completely helpless. Over a lifetime of dealing with them I’ve learned tricks- advil or muscle relaxants at the first symptoms, dark rooms, gentle exercise if they go into a lull. All this is blissfully complimented by jamming a Magic Wand against the sinus under my eye and letting it buzz the pain right out of me.

I will probably never get off from vibrations alone, my tiny clit doesn’t like that kind of lovin’.  But I think, as this blog suggests, that my approach to my sexuality will be as unorthodox as it is honest, that there is no one wrong way to do it and not having a migraine is well worth the sticker price.

Yeah there’s an affiliate link here. Yes, I tried and tested the product in question. I like it so much that I bought it.