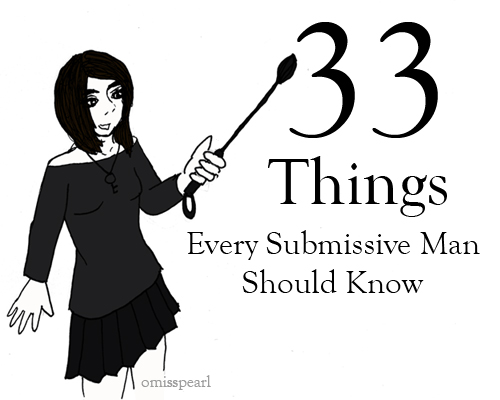 1) We are people too, and all the vanilla courtesies still apply. For you as well as me.

2) Don’t fawn all over us; you will sound like a tool. Don’t call us “Mistress“, “Goddess” or “Lady” unless we tell you to. Don’t try to act like our sub without our consent- anymore than you’d act like a woman’s boyfriend without her say so. We shouldn’t try to pull rank on you either, just ‘cuz. Don’t put up with that shit.

3) That hand kissing thing doesn’t make you a subservient old school gentleman, it makes you a show boater.

4) Your fetishes, needs and desires matter. They are not, however, my problem until I choose to make them my problem by getting into a relationship with you or choosing to address them when we play, and probably anything we do will be a mutually complimentary fusion of both our desires- don’t stand for a relationship where your needs aren’t being met- it doesn’t make you a True Submissive, it makes you a martyr.

5) Getting flogged, spanked, dressed in lingerie, or pretty much all your fetishes are intimate acts, even if they don’t involve your penis. They are therefore as intimate and personal as asking for sex. Govern yourself accordingly.

6) For the love of all that is holy, stop offering me acts of service unless they are your fetish, or I specifically say I want them, and even more so, stop trying to trade acts of service for acts of kink. A house cleaner makes way less per hour than a pro-dom.

7) Not all female dominants are professionals. Not all women are comfortable with you buying them stuff. In fact, if you want to buy them stuff, you still shouldn’t lead with your wallet because we will think you think your money has power over us.

8) Your submissive desires do not define you. They are part of who you are, but not the entirety of who you are, and a dom’s long term interest in you will probably have a lot more to do with the whole person than you being a sub. Also the type of submissive you are is informed by the rest of your personality.

9) Women who demand tribute to talk to you or to prove your seriousness are scammers or naive. Professionals who stay in the business will be trading a real service for money, and will be as explicit and up front about what they do to the extent that the local laws governing solicitation let them. Women who ask for money to dom you are professionals, regardless of skill or sanity.

10) You are no more or less valuable or worthy as a person because you are a male submissive. You are not doomed to only getting your kinks met if you hire a professional. You are not unattractive to all women, even the doms.

11) We probably like looking good and being fantastic as much as the next person, but we can’t sustain a conversation based on how awesome we are. It’s either trying to force a worship dynamic on us, we will perceive it as you discussing your turn ons, or typical human modesty will cause us to blush and deny. Use compliments like pepper with new people- sparingly applied where suited.

12) On the flip side, working on being more hot can’t really hurt your chances, particularly if you want a ‘hot’ dominant woman. Make sure your hair is groomed and flattering, your clothes fit and you otherwise take advantage of the best tools available to your regardless of your subculture memberships. Humans are shallow.

14) When you do hook up, don’t deliberately disobey and do a shitty job of things because you think that’s the only way to get beaten/punished. Make a clear distinction with your dom regarding your needs- if she really cared about what she told you to do she will not want to reward you with your fetish when you fail to do it.

15) You may not meet your true love at a munch, but you probably will meet other kinky people on the same page as you. I can’t promise that you will make friends because you might be shy and socially incompetent, but I can promise if you want a relationship you will have to talk to people somewhere. At least all the people attending should be soem sort of kinky.

17) If you tell us that you need 300 levels of secrecy because of your Very Public Job, and you’re not a minor celebrity or living in a small conservative town of gossips, we are going to think you are married. Likewise, ‘discreet‘ is code word for ‘cheater‘.

18) Your wife might not understand you, but we know even if you are awesome, at best you’re going to break our heart  when you try to shield us from some other thing you think we can’t handle, just like her.

19) Safewords are so you can say “no!” and have her ignore it. Ignoring a safeword, on the other hand, is bad news. Discuss in advance what it means to you and do not assume. Hell, never, ever assume.

20) If you act like every female dominant you meet is the last lifeboat off the Titanic or your only chance at a relationship, we are going to run away, because it will make you behave like a nut job. And you will get taken advantage of because you are desperate.

21) If you expect every female dominant to come fully equip with gear, whip skill and a private dungeon, you will be sad. If you expect them to look better than the normal range of attractiveness you will also be sad. If you try to buy us all the accoutrements to turn us into your idealized dom, you will probably also be sad and we will be grumpy because you think we are some sort of fetish paper doll and now our spare bedroom is full of your shit.

22) Courtship overtures that start with a positive comparison of us compared with all other doms, such as that we are prettier, saner, smarter, etc… do not go as well as you think they will. Keep in mind that it is all too easy to project your ideals onto strangers and it’s going to be very awkward if you praise her for something that is not the case.

23) We can’t despise you if we want you to be our sub. We can pretend. We can say all sorts of mean things. But only an emotional masochist will get into a relationship with someone who really makes their skin crawl or really is unsatisfying company.

24) Your penis size is less important than you seem to think. Don’t get me wrong, some of us care- and a lot of us will wanna see, but later and well photographed.

26) Don’t tell us how our gender or ethnicity makes us naturally dominant. Also, vanilla tip, praising our looks based on ethnicity is going to get frowns. Especially if you get it wrong.

30) Switches are not inferior dominants or lousy subs. Not all switches are on/off style either- so their desires may be more of a dimmer than a radio button.

31) Don’t trash talk other subs or try to pull rank based on how you are “alpha” or “a true submissive”. Doms don’t like it when you tell us what we want, and you don’t know what we want until you get to know us. Your ranking system is merely self labelling.

32) Target sanely. All your service sub studying in giving manicures and tending to high heels will baffle a gender queer dom women who just wants a nice service sub to help her/them with carpentry projects. Prep is not bad, but there’s no magic bullet and what you did to prepare for us will inform us of who you think we are.

33) Dominant women can be insecure, sad, clueless, make mistakes, need snuggles, love you, have terrible taste in media, get horribly infected ingrown toenails, have body image issues, question their sexuality and self esteem and at the end of the day are just as lost, clueless and fumbling around as you.

(There you go, 33 heteronormative things for F/m minded submissive hopefuls to improve their chance of happiness. – Oh goodness, this list has gotten popular!)