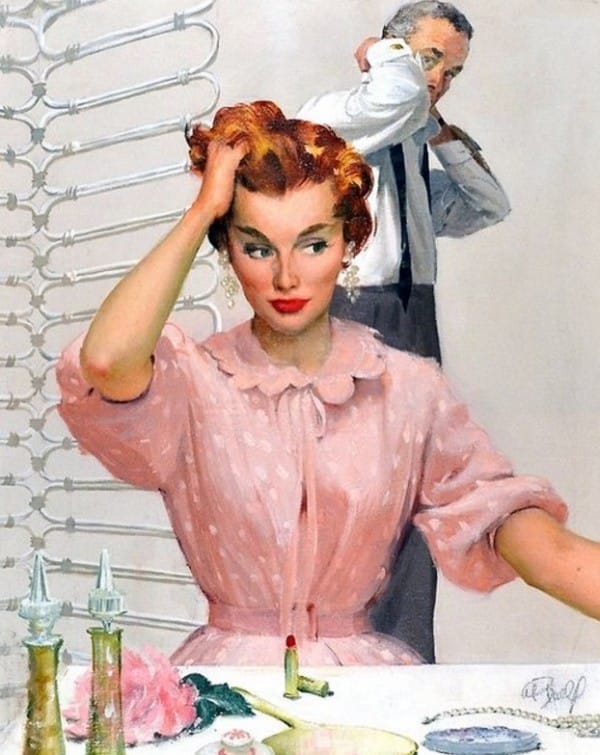 I am a bit-more-than-occasional reader of your blog. Recently, a thought has been egging my curiosity.
I was wondering that whether its possible for a male and female in a Femdom relationship (with said relationship being applicable in the bedroom and to a certain, not-discernible-to-others extent, outside the bedroom too … just to provide context) to still have traditional roles with regards to division of labor in the household. That is, man is breadwinner who is career oriented (or has certain ambitions in life) and engages majority of the week’s time in bread winning, career making and training etc. while the woman is in-charge of the household (and maybe has a small side business too in her spare time). A Goddess-of-the-Hearth, so to speak.
Just to be clear, I’m not at all trying to imply that that is “how things should be”. People should do what they choose to do, whether its career-making or home-making, and people whose choices are mutually compatible should come together. Also, I’m the last person in the world to “look down” on the role of a homemaker. I’ve seen first hand how invaluable the contribution of a homemaker can be that s/he provides in exchange for their upkeep.
My query is that, in your opinion, is such a domestic understanding/arrangement even practically possible in the context of this kind of relationship. And if it is possible, just how likely is it to find a woman genuinely into femdom who’d be willing for such an arrangement in life?
Looking forward to your response.
Thanking you,
Yours faithfully,
Inquisitive

Contemporary feminism reminds us that household domestic work is still work, and although not compensated financially, is no less useful. Indeed, there is a push to have measures like the GDP recognize this unpaid labour as well, to truly reflect the productivity of a nation.  Housework is work, and it is largely misogyny that it is devalued in the first place.
Criticism of “traditional” roles relate not to the labour itself, but to a lack of options that often accompany the pressure to do it, or stereotypes that demand other behaviours along with the universal mundanity of making meals and removing the dirt from the living space. No matter the railings of reactionary ninnies like “Above Rubies” or the emotional self stunting of the “Surrendered Wife”, if everyone in the relationship is freely choosing things to be so, then all is as it should be- and there is nothing about domesticity that implies submission.
Indeed, domestic discipline, with it’s spoon and hairbrush wielding matrons, is, in itself a fetish.  The imagery of a fashionable mid-century woman is just as likely to be put on like a costume by a dominatrix as an evangelical, and both do so because it armors them in a kind of power we are inherently aware of.  You see it even in would be secular reactionaries like Red Pill Women, or the assertions of the #tradwife brigade, that once they take it outside the context of a consensual kink, they can bray all they want about submission, but these women are, functionally, in charge.
Once you aren’t bound into a role, everything else is set dressing and personal choice.
Even excluding the wealth of pornography that blends so called traditional domestic imagery with femdom, to be a dominant is an act of desire that doesn’t stick itself to any gender or social class.  Women and men have always, sometimes, wanted female led relationships, regardless of the particular background noise of their culture, and simple, pat separation of feminine = submissive, domestic = drudge is ahistorical, revisionism, trying to make a narrative that was never as fixed as we seem to try to teach, where woman in her natural state is a slave.
(Ok, ironically for most of human history, human labour for all genders was primarily everyone subsitance farming, but even then, femdom is not new. Even when your biggest concern was spinning enough wool to not have your fingers freeze off while stockpiling turnips, there had to have at least been a few women who took the laundry paddle in from the wash house and filled their smokey wattle and daub hut with squeals and giggles. It ain’t like modern doms of any gender are all high powered CEO rocket scientists)
And the truth is, even unpacking traditional roles, femininity often includes expectations of power and management, from deciding family spending to directing the entirety of the life choices of the family as a unit. When women protest exhaustion or frustration with their gender, is is not the work itself (although it can be hard), but the sensation of being taken for granted, or when their leadership is undermined. When women control their own finances, bodies and destinies, well, if you have the shared wealth that one of you can concentrate their labour indoors, while the other works outside the home, go nuts.
So in parting, have your femdom housewife life. As long as you are listening to her and affirming her power, you should be fine.
Love,
Miss Pearl