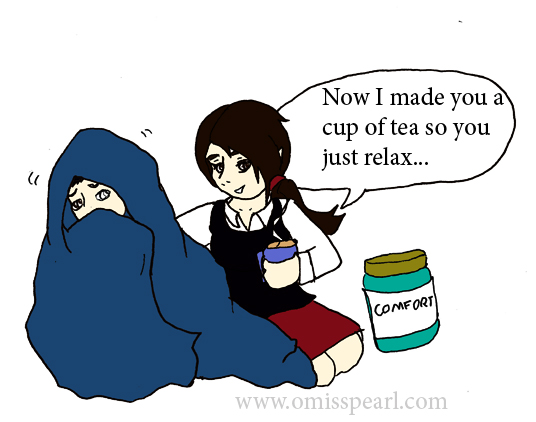 After a conversation with a friend about the challenges that we face in relationships, I’m going to talk about something I’m not good at. Which is to say, letting go with other people in a way that gets my needs met.

At it’s best, my penchant for caretaking is a good thing that is inherently rewarding for me. I’m very commonly the tea-and-blankets lady. I genuinely like looking after people and it’s good for most people around me.

A pretty big fetish dynamic that I like is hurt-comfort. I want to fuck the person up and then patch them up after. It’s a reason why I’ve never been able to do hateful D/s, since the aftercare is pretty important to me too and the nastiness is not the end point of where things are for me- my domliness extends into cuddling them and fussing, and so forth.

Of course I think that caretaking is a very common permutation of D/s. I also think it’s significantly more common in women, because of the gender training we get to do it as a duty, but also because being the ‘mother’ is a classic route to power in a world that penalizes other forms of self promotion. “For your own good!” is a great way to control people.

But it also feeds into a particular sort of self sacrificing martyr loop that can be inherently toxic. The script runs something like this:

You learn, pretty early on, that people need looking after. It could be physically, like if you attend to a person with a regular illness, or emotionally if you have a family member who is less than sane. It could be related to self denial in the face of poverty. For various reasons you get very good at rising to the occasion, putting other people’s needs first, being extremely accommodating, etc… The environment heavily rewards this, both by having the hysterical/hurt/helpless people around you being less splah but also a measure of control and power- that allows you to learn that you can push people’s buttons in a non-guilt inducing way, and they may even praise you too and want to be with you more when you’re in nurturing mode. Suffice to say, because this blog is self referential and i use myself as the main example or everything, I had an upbringing that encouraged subversion of the self as a virtue, as well as being accommodating to crazy to the point of getting enmeshed into it.

It’s not a bad thing for people to be loving and giving, but if you deal with lots of needful people, your own needs may not get met and you don’t experience as many reciprocal dynamics to learn off. And if life throws a lot of drama your way, situational or interpersonal, you come to associate being needy on your part as bad behaviour, especially if when you had needs you were neglected. Of course since people you love still have needs you don’t precisely develop a rejection of all neediness, but it becomes important to subvert your needs for another person. This can be an addicting sensation of power and invulnerability and may even lead you to reject overtures of others looking after you because you don’t trust its reliability, and more to the point you don’t want to be the Weak Person because that chips away from the ego- or you’ve seen people with worse shit to deal with so you feel like an imposter when you’re being nurtured.

Another draw back is that you tend to also develop a higher than average tolerance for human frailty which means that you will, for example, collect strays or form relationships with people where you’re a Jesus Girlfriend. Which is where the need-to-be-needed can exceed whether or not a relationship has anything to offer you, and serve as a way of making yourself indispensible to something that wasn’t worth the investment.

Some people also end up in a guilt-anger spiral where they exceed their tolerance or get taken advantage of while biting their tongues, presuming that the other person wouldn’t be so selfish if they didn’t need it; and then get pissed at the person and then feel wildly guilty because (s)he can’t help being a useless tit. A warning sign you’ve gone too far into the wrong side of nurturing is that you end up feeling that everyone around you ‘can’t help it’, but would be unable to find their pants without you.

It also leads to some of the usual cognitive dissonance coping skills or all the stuff every person has to deal with, caretaker or not. Since everyone does have needs, you included, it’s not uncommon to package your needs in ways that don’t make you have to give up that ego thing. If you feel lonely, for example, you find someone who needs things and go be helpful at them. If you worry about being unpopular you become the person who does stuff for everyone. If you need to break up with someone it becomes necessary to frame it in terms of “I wasn’t meeting their needs anymore”. It’s certainly a lot less insufferable than how many people cope, but it still deserves analysis.

A classic example of the dark side is thought patterns like deciding that the person can’t handle that you are upset with them, because you not getting your needs met would make them feel bad- so you pretend it’s all okay. On the flip side when you want to get territorial it’s easy to sell yourself that you are simply being self sacrificing to take over something and organize them better- I’m sure there’s at least one person who knows this who thinks I’m actually pretty needy and can’t find my own pants without help. Caveat lector; author is biased.

It also makes you extremely vulnerable to people with the exact match on the opposite pole of “I need to be looked after all times to feel secure!” Since abusive relationships often have a foundation in the other person demanding that you leap through increasingly absurd hoops to make them feel properly attended to, or the person will go splah (which can range from physical violence, to emotional abuse, to simply attacking themselves or going into incoherent self castigating hysterics, which is a particularly effective tactic against someone whose empathy is overly keyed into people) you can end up mired in some pretty nasty scenarios. I know from personal experience. Maybe, you, dear reader have seen that in action.

Not to mention that the tendency to go above and beyond the call of duty can also end up giving you fairly high standards for others- or give other people the perception that you do. So your circle of friends, lovers, etc may conclude that if you brush off small overtures of caretaking and you do such a fantastic job than anything they can muster as a mere mortal won’t impress. Or you assume that because you know you put a lot of effort into preemptively looking after people in a way that comes naturally to you, therefore your needs must be so complicated and difficult since nobody has moved in on their own to fill them. One can internalize that that nobody can, and even throw in an extra dash of shame that you must be secretly the *most* needy person ever so all the more reason to be responsible and keep it locked down, right?

Maybe this applies to you, or maybe it doesn’t- either way it’s something for me to think about and analyze. I certainly won’t stop enjoying the caretaking aspect of my personality, but I also feel like this is a phenomenon that’s worth paying attention to.

4 thoughts on “The Darker Side Of Caretaking”