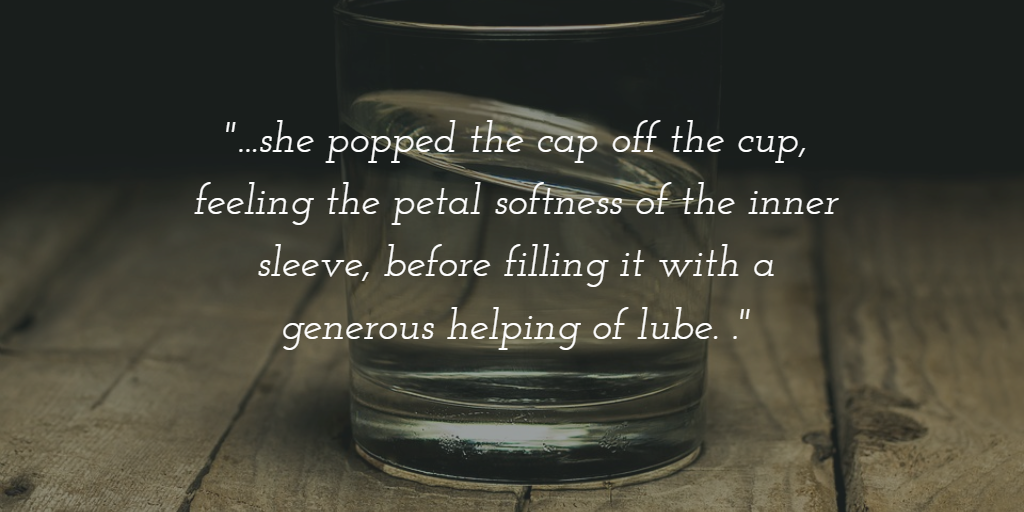 “It’s too hot to fuck.” She was clad only in panties, sprawled so they just touched, arm to arm and her ankle layered over his. In her perception is body was radiating heat, and she’d broken off their kissing to escape it.

His boxers were covering about 3/4 of an erection, enough to keep her interested, predatory and playful, while the cuffs wrapped around his wrists and ankles held him, immobilized and spread, on display.  She had planned it out differently, tease herself and him until he was full-hard, then ride him, but three minutes of making out had put an end to that. Summer was getting in her way.

He looked disappointed, but not like he disagreed with her logic.  “Ok, Miss…”

“Hmmm.” Although the fun of denial had its merits, it wasn’t what she wanted this time. She screwed up her face, setting herself to a new course of action. “Do exactly what I say, and don’t move.”

She stooped over him, pulling the velcro loose from his right wrist, safety first. “Stay.”

She left the room knowing he was safe, getting herself a tall glass of ice water, adding a straw with a sense of whimsy. As her demand, when she returned, he was still lying in place, band of the cuff still neat under his wrist. She smirked, refastening him. “Good boy.”

A moment later an the toy box was dragged from beneath the bed. “I was thinking I was going to make you into my fuck toy, but instead I think I’ll fuck you with some toys instead.”

There was what she needed, and more she didn’t inside. The cuffs and straps always lived on the bed for when she wanted him bound, but the rest was a buffet she lingered over, picking just the right accessories: the lube in its plain packaging, the plug, tapering from blunt point to fat flare and then its skinny neck and second wide ring, all silicone, and the canister with its supple sleeve lining the barrel. There really wasn’t a good name for it. Pocket pussy, onnacup, fliphole. Flesh Light. This one was an offbrand, bought at a sex shop, plain white plastic outside, pale beige inside.

When she’d picked it out, she’d tested it with her finger, penetrating it, and imagining what it might feel like. It was so soft, yet the pliant sleeve inside had a strength she looked forward to testing.

He got a glance at what she’d picked, and lifted his shoulders a little off the bed, stretching to try to see more.

“I should punish you, I never said you could move.” She took a sip over her water. “Be good.”

Casually she dripped her fingers into her water and flicked them at his torso, startling him with the sudden motion. He flinched. She grinned.

“Ha.”  She fished an ice cube from her drink and looked over her target. His skin was pale, blotched pink at the least pressure, his chest and stomach marked but not hidden by hair.  The line of his collarbone made an excellent target, playful, leaving a melt trail as she pressed it to his flesh and slid the ice along.

He gave a little sigh as she circled the ice around his chest, around and then the lightest nudge against his nipples.

He was biting his lip, curious to see where she went next. The ice went quick, melted down into almost nothing and she flicked her tongue across the melt-trail, tasting salt and feeling the contrast of hot and cool skin. He whimpered.

“More?” Her other hand cupped his groin through the fabric over them, then tugged at the elastic, sliding them off his hips, only to realize her mistake.

She made a tsking noise at herself, stopped from further undressing him by his bound legs. “Ha. Didn’t plan everything.”

A quick rip noise and she freed his leg long enough to get him completely naked. “You’re in for a treat, slut. I want you full.”

Even in the summer heat the slick, clear lube was cool on her fingers, glossy and viscous. She squeezed the bottle to ease out a little more, then set it aside.

Her fingers hooked in a come-hither motion, the longest one pressing and coaxing him to relax, spreading the lube and pushing it inside him, then caressing the plug, rolling it in her hand to coat it. She didn’t force, instead using an insistent pressure to push it, until he yielded, swallowing it up, first the tip and then the widest point.

As the swell of it slipped inside him he gave a grunt of accommodation, and that yielding gave her a little thrill that traveled from her cunt up her core. “Do you know what happens next, slut?”

She’d played with him, with the toy before, but it was still a novelty for both of them as she popped the cap off the cup, feeling the petal softness of the inner sleeve before filling it with a generous helping of lube. With the same casual ownership she handled the toys she grabbed around the root of his cock, pumping her lube slick hand up and down, once, twice, three times, before guiding the head of his cock into the narrow constriction of the sleeve.

His reaction was instant, a sort of tension that jerked his hips up at the first hilting slide and squared his shoulders. At first she took her time, hearing the wet, sucking sounds as the sleeve-and-cup did its work, nubs and ribs hidden from view but teasing the length of his cock. “Just right, hm? Tight but not too tight so you can’t feel it?”

As he always did during sex he had gone almost non-verbal, but he managed a quick nod, albeit a little shakey.

“Well look at that,” she purred, enjoying the perspective that let her watch as she engulfed him again and again. “You get that extra kick of hard when I use this, don’t you? But the best part is that it stays.”

He had his eyes closed, but his hips were making little thrusts from below. To punish him, she lifted her arm up a little, pulling the strokes back out of his control, while her palm rested on his stomach. “Nope, you will come when I want you to.”

He made another moan, but she took her time, building and reducing, until she could smell the mix of sweat and lust in the humid air. “Ready?”

A slight twist, skillful and a speed up were all it took to finish building. With a certain degree of satisfaction in her craft, she saw his breath catch and his balls tighten, getting him just about to the point of no return before her verbal consent sent him over.

She gave a chuckle. The sheets were soaked and his hair was glued to his forehead. Even the exertion of working the toy had left her fanning herself in the aftermath. He panted, open mouth, at the last little spasm.

“Shower time. Then my turn.”