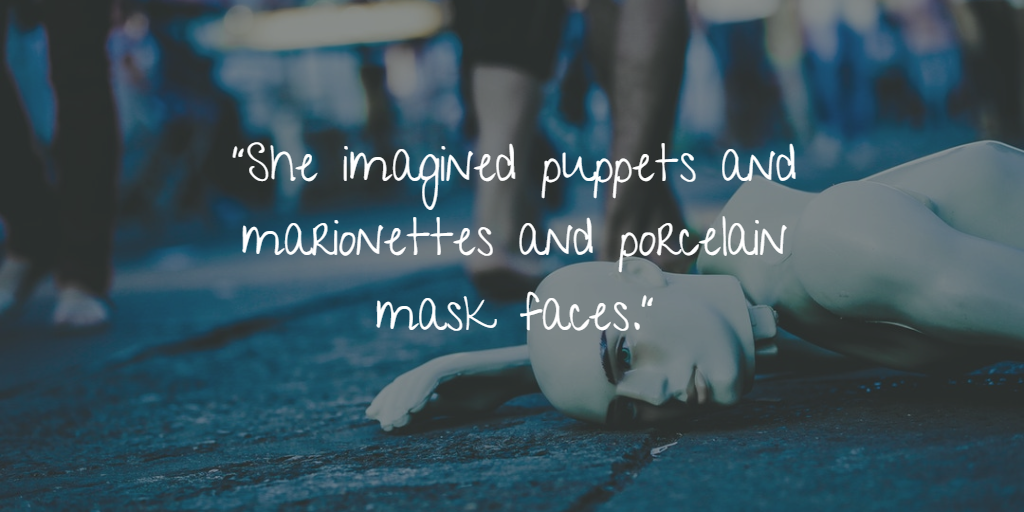 “Don’t move except when I move you, don’t speak.” She held a finger to his lips, looked into his eyes.

They were sitting on the edge of her bed, double sized, blankets tucked and made, just enough room for two. She smiled, a little unsure at first of her idea, but with anticipation of getting what she wanted.

He didn’t nod, just immediately complied, putting away words and letting himself take a blank affect when she started to strip him. She admired his unresistant weight in her hands, twisting and pulling, shirt off, pants off with a bit of rolling and pulling, socks, boxers. He neither helped nor hindered, letting her decide where this was going.

When they were done, and she was clothed and he was naked, she fussed about a bit, deciding to tie a thick blue ribbon about his neck, reminiscenct of kittens and puppies, gentler than a collar and pleasant against the cream of his skin and the blond shine of his hair. Things to play with and cuddle, but helpless things, to be trained.

When she kissed him, he almost kissed back, but caught his own twitch of the lips. Instead her tongue darted out in a lick against his and her fingers stroked along his leg, keeping him seated while she explored along his jaw and nipped his ear. Still, he held fast.

She remembered her awakenings, slow, stories, the Steadfast Tin Soldier, dedicated to death to his Ballerina, the Ken dolls that found their way into the old budgie cage she was let to play with when she visited her grandmother. She imagined puppets and marionettes and porcelain mask faces.

And then she took both shoulders and pushed him onto his back, swinging her leg over. Her fingers dug in and her confidence in control grew, a lightness and a sense of connection deeper than she ever found in conversation. Hers. Hers. All hers.

The very subtle reaction to her weight straddling him, and the effort to keep his face composed, at her order. Nonetheless there were all the hall marks of arousal in the warming of his skin and the slight tautness in the line of his throat, surely and out of his control as a clockwork wind up. She grinned with full teeth and ground against him.

She knew that maneuver often drew protest from the pushing, but this time he was stoic and inscrutable, as she ground her crotch to him, ending up pressed to his thigh as her cunt told her that it had taken a hint from the images in her mind and the intimacy of the moment.

“Ah. Fuck!” the utterance wasn’t for his benefit, the sex much quieter when is was an act of personal gratification. As she did with her toys, she pressed at her clit until the orgasm she wanted was on the cusp of happening and then let the unconsciousness release happen, groan from her throat and gush.

She drenched him, and he didn’t move a muscle. instead she waited a few moments to let the wild pounding in her chest recede and roll-dismounted to the bed next to him. A heavy sigh escaped her chest on impact. “Ohhhfff.”

He was still unmoving. She smiled, not cuddling him in the heat of afterglow, but letting the back of her hand stroke over his chest. “Good boy.”