Just because I didn’t like a series doesn’t mean it’s not  good example. In this particular instance, I’m going to look at a fictional male sub character who is cast as being cool, awesome and all around great with inclusion of pretty explicit and blatant D/s. There’s nothing stealth here.

And it’s not surprising. While there’s always the odd image of a tied up, tortured hero to tease viewers and readers, male submission is just so inherently normal that it’s surprising there’s not more things with such strong kink focus.

Richard: The Hero Is A Sub

And it’s chock full of plot facilitated female dominance. It starts with the canonical female love interest/lead, Khalan is a “Mother Confessor”, a magical being gifted with the ability to make anyone fall passionately and unrevokeably in love with her to the result of perfect obedience. And your only protection is to love her that much already. And guess who, of course just naturally loves her as much as one of those magical slaves?

But the series doesn’t stop with Khalan. By book one we are introduced to an order of leather wearing, pain magic wielding Mord-Sith, who train people as pets and demand to be called “Mistress”. Later, another group of matriarchs, this time magical wizard trainers, pop up and incidentally have a penchant for abducting magic men and locking collars around their necks. 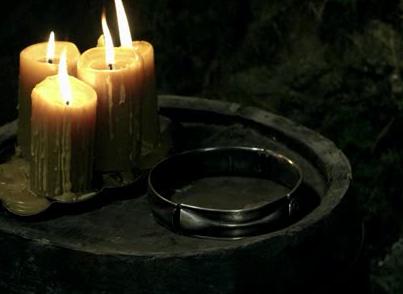 And then another whole book has Richard slaved to a woman by magic, so he’s forced to be her fake husband. By plot convenience, although his love for Khalan is labelled as True, Richard is constantly abducted and dragged away by one woman after another, with them all being cast as sexy, hot bitches who want to jump Richard’s bones until they rattle. And his constant slave/prisoner status is never considered to detract from him and his masculinity. Even when the poor bugger is raped by a Mord-Sith.

Rather the reverse- the noble suffering is seen as something that makes him cool and is used as a stand in for depth, as although he becomes emperor of the whole god damn world by the end, with all slavishly acting like he is Libertarian Jesus, he is explicitly allowed to have fallen in love with a Mord-Sith (simultaneous to Khalan) and sympathize with the numerous ladies who want him to be their property or teach him by force. The books have a bad habit of making the lead eventually show up everyone and everything by being just that awesome (all while being a “simple woods’ guide”), and I would not call them well written. But… when pop culture normally limits male submission to a punch line or a temporary inconvenience… the author managed to convince people to pay him a lot of money to talk about his submissive fantasies. And then film them without any self concious irony.