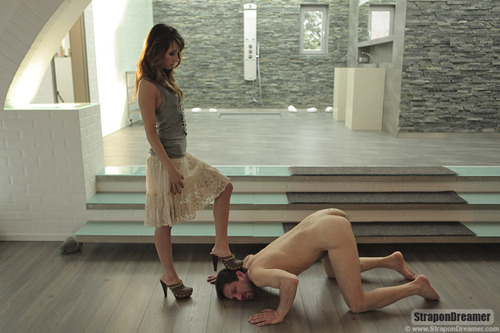 I’m really bad at a lot of stuff. I don’t even touch single tails or floggers anymore, I feel like it’s such a lost cause. My ropework looks like a cat’s been in the yarn. I have an aim that hurts me as much as it hurts the victim.

But I think the biggest learning curve for me, has got to be the psychology behind D/s. From initially having a sadism style like a rabid cat being pelted out of a catapult and having to tone it down in my initiation and learn sub does not necessarily means masochist (oh, that wasn’t okay? Ooops…) to being rather baffled by sub behaviour, it’s one of those things where I’ve been learning by doing.

And it’s not just one voice, it’s several. The first time I heard a sub putting on the small voice I thought he was making fun of me. Basically imagine an adult man suddenly having his normal speaking voice turn into a soft coo. Like, the least threatening baby-voice ever.

And there’s the dom voice. I am demonstrably comfortable being a hell on (w)heels angry dom, but that’s not it. Being that pissed sounding is an emotional bludgeoning tool.  The dom ‘voice’ It’s a sort of eyeflashing, looming, controlling cajoling that’s just as much a singsong as the small voice. And above all, it’s smiling.

And there’s the triggers. A million and one bloody buttons. At first I generally rejected them as tedious- you can only listen to a guy tell you about how the sight of a knee sock pinching into a fat thigh makes him feel weak for so long before you get the urge to never wear knee socks again. I guess, lacking the ability, I never understood what feeling submissive really meant until I saw it in action.

But it’s really, really good to feel someone doing that for you. To watch them slide down into the ‘less than’ head state. To hear all the little groans and see how they change how they hold their head. For me, the triggers are probably someone’s vulnerability and finding the little hooks that you can pull that spread them wide open so you can see inside their mind.

I asked on reddit what people’s dominant or submissive triggers were. The trend seems to be tone of voice, or certain special phrases, or being recognized and appreciated.  Strangely for all the  dudes outside the scene who talk my ear off about panties or ponytails, this is not a common occurrence in conversation with people inside the scene.

In day to day life, I do wonder how actually vulnerable people are. My friend Kay goes into a sort of boneless state like you rebooted a computer and you’re watching all the jaunty loading screens… if he’s hugged by a dominant woman. When he drops it’s like a ton of bricks, and you better be prepared to put him somewhere safe. Another friend, Mr.Sub, doesn’t really show unless you pay very, very close attention. But when dropped he reports that he basically loses the ability to resist.

Is this the same as the much vaunted “sub space”? That’s usually communicated to me as coming from more masochistic areas. Like a meditative thing that creeps up on people during a beating.

I bottom- I’m familiar with getting pain drunk. It’s a weightlessness, but it’s nothing like the way I see people curl in on themselves in a way that drops all their defences. And it’s nothing like the wildness that seeds in me when I have a victim. So what, I wonder, is the pleasureable head state people are getting?

Unfortunately people are still trying to come up with relationships between D/s and personality and we’re a long, long way away from being able to stick masochists in MRI machines. But some day I’d love to know what exactly is going on when I watch a man’s face change, and his eyes shutter as his lips pull into a vulnerable startle and the veil of ownership has enveloped him.