Male subs and popular fiction generally have an awkward relationship. Although it’s now acceptable for the hero to end up in handcuffs for hanky-panky (though it’s aways the lady’s idea, to show off that she’s sexually fierce), there just isn’t really good options for an explictly male sub unless he’s a punchline.

But a lot of D/s doesn’t call itself explicitly kinky. It hides in plain site. Just like Catwoman wasn’t literally a dom until Frank Miller got his hands on her, these fictional representations are can even end up informing archetypes and breeding new approaches to kink. The male characters I’m going to talk about here might not be your ideal submissive. They’re not even necessarily characters that get me going, but they’re all guys you’re supposed to regard positively. 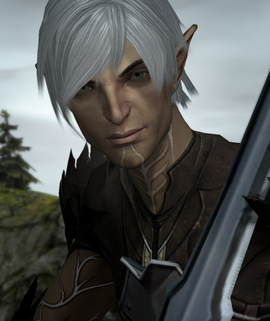 First, a tiny bit of background:

Dragon Age is an RPG franchise belonging to Bioware. Thanks to a focus on character interactions and a willingness to pander to everyone, they (and Mass Effect) are particularly beloved among the female half of the gamer population. DA2, part of the series, broke ground both with a heavy effort to push the option for gay/lesbian romances (as well as not making it required, the hero can be asexual if you like) and served up a brooding elvish slave boy for people into heterosexual relationships to drool over..

He’s faye and pretty. He’s got badass tattoos and badass battle skills (and a bit of a bad attitude), but deep inside he’s damaged, wounded and his slave experience is a big part of his sub-plot, while reconciling with that is what he needs for character development. Although the game itself is not as well regarded as some of the other titles in the series, Fenris+femaleProtagonist is popular and as richly fleshed out as the other romance options. (That’s her on top there “LadyHawke”)

Of course it’s Bioware, so everything is in animated barbie-and-ken RPG dollies for actual game footage:

You can also run this scene with him being more fighty and shoving you before you shove him and dissolve into PG-sexy times. I’d also characterize the romance here as something you need to pursue- unlike some of the other characters, this is one where it’s female initiating on male.

The result has meant an outpouring of fan art… Note, most of the stuff is being drawn by women. We like this shit. Attention boys who want to be taken seriously and be seen as masculine and be nurtured, protected and cuddled… and tortured… But other than talking about things that get me flushed and flustered, I think another thing that makes these things very worth examining is how they can help us talk about the relationship dynamics we find sexy in a way that doesn’t have quite the same harmful baggage.

What’s your favourite fictional male sub or sub like character?