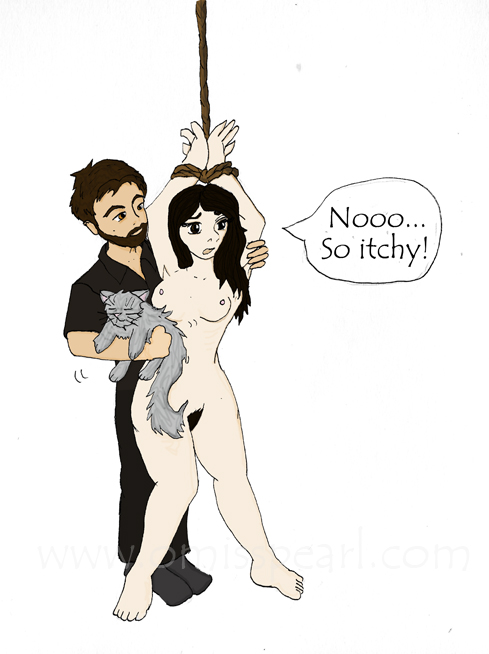 Wildcard is a switch

The open-ish bit in our relationship makes whether or not switches *need* to be poly a moot point. There are no shortage of cute little things wanting spankings to keep Wildcard happily satiated if switching was some sort of dual meter that needed to be filled. But it doesn’t really work that way because D/s orientations seldom fit into neat boxes to begin with.

Take any group of doms and there will be such a broad expression of how they do what they do and what lifts their luggage, that dominant is just a vague starting point. For example Ferns abhors brats, while Dee would like a sub who can second guess her with panache. Me, I’m a sadomasochist. “Aha!” a fool in the audience pipes up. “Clearly you just need a guy to show you how to submit properly, like all so called lady doms!” Well, no, sit down fool, and I’ll explain.

I’ve said this before. I like my violent bedroom romps, but I can’t sub properly. It rustles my jimmies. Its not been for lack of trying, but the closest I ever got was power-behind-the-throne style scenarios.

On the other hand, Wildcard also expresses his switching on the binary. He can be all masterful domly dom; or he can be helpless and whimpering and craving being told what to do. Its all the same to him, really. For him, it’s therefore been an occasional challenge to deal with the fact that I can signal all quivery and whimpery, but my brain just doesn’t go to happy sub land. some of this fits into the psychological dominance thing- I like controlling guys with dom urges with seemingly vulnerable behaviours. I already told you about what I did to the Swede- finding it more erotic to “force” him to explore his dominance than trod the well traveled ground of his submission.

The peril, though, is not that the switch or the dom is not enough in the relationship, its that dominance is a really vulnerable state, and with Wildcard the biggest challenge has been unhorsing him mid-ride, knocking him into the metaphorical mud. Its a challenge for him to work with the fact that I don’t bend in the way a sub is supposed to. You know, you apply the right sot of pressure and it melts into yum.

You can mark a change in his behaviour from that point on- I think its were he became aware for serious about the dom thing with me. For him beating a girl is a means to creating a reaction in her that he wants, and I don’t think he’d really cottoned onto the idea of using his needs for my own sake or even that the door that he thought led one place just connected him through to the same stairs as the other route we took. For me, whatever I’m doing, its about Me. He already noted that when he met me, I was refreshingly different in my reactions. On the other hand, his dominance is a real thing.

I’m not entirely sure how he thinks about my imperfect switching. For a while he would make jokes about it “no, collar YOU! heeheehee…” I sometimes feel that he half gets it- he understands not wanting to to be not dominant, but not so much my dogged instance that switch doesn’t feel right as a label. In any case its something that I think he internalizes as “Pearl’s odd but important limits” in the same category of not putting a wet finger in my ear- he doesn’t need to understand it to respect it.

But as far as the urges I can’t fill, that’s just part of the way the game is structured- we’ve both discovered that there’s things I like (eg face slapping) that feel very wrong for him. I don’t feel that his switching in any way is different than a sub partner that doesn’t want to do whatever their limits are or has fetishes you don’t share.

I guess the biggest “peril” is not the odd consensual spank, but rather working with his dominance in such a way as I can hijack it to get my kicks, without devaluing it to him. Nonetheless, dating a switch is still the best way to get the sort of behaviors I want to hijack in the first place, and that part is the pleasure part.

2 thoughts on “Perils (and Pleasures) of Dating a Switch”