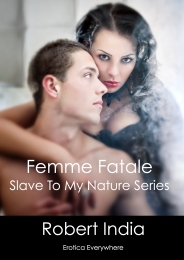 1 thought on “Review: Femme Fatale: Slave To My Nature Series by Robert India”