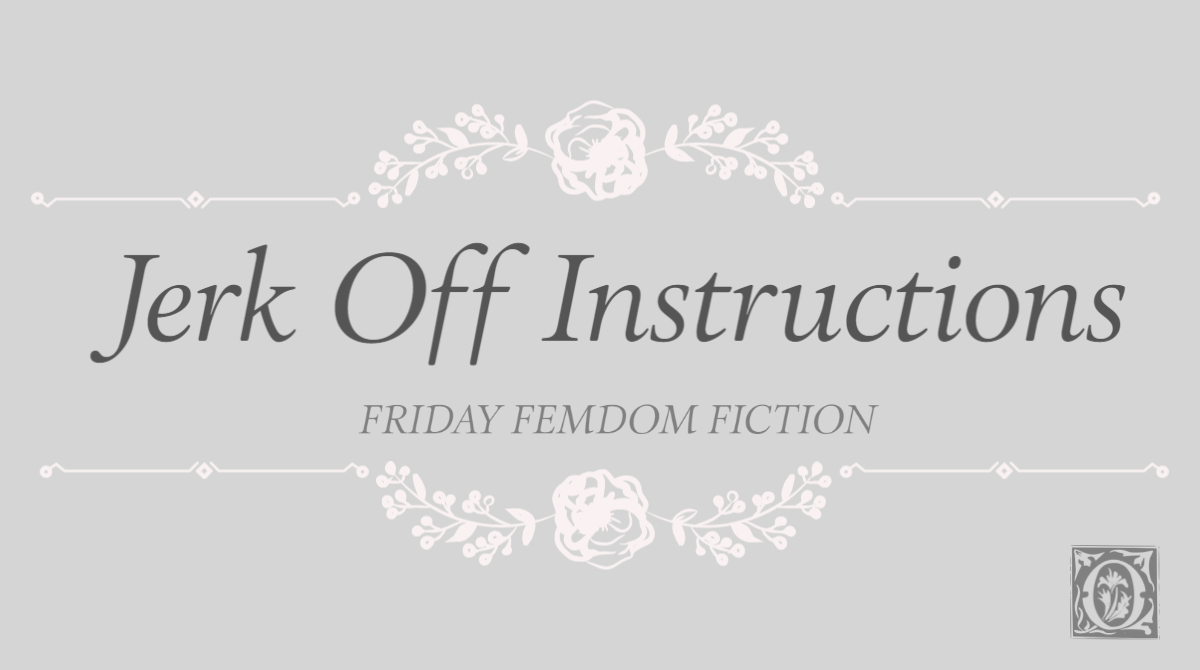 “Take off your clothes.” She spoke,  abruptly, after breaking off the kissing.  She could still feel the stoftness of his lips against hers, the right amount of wet, and the taste-that-was-not-a-taste when she had licked them.

They’d been making out for maybe five minutes, although she tended not to keep track of the time, with a buzzing sort of urge starting to clamour at her to grab control. It always came like this, with the arousal, that as the curl of sensation built up her spine, her mind turned mean.

Her words got his attention, and a little bit of a challenge in the tilt of his head, as yet unlifted from the pillow.

“Yes. Do it.” Sitting up, she got a good look at the whole of him, skinny, very male, matched to her in casual but not shelpy clothes as he took a certain pride in his appearance: a fitted t-shirt in a dark grey, and slacks in khaki that emphasized his squareness.

He had the start of the haze of lust in his pale eyes, body warm and stretched out in her bed in the mounded up cradling of the heavy duvet. A lazy late spring breeze carried fair sounds from outside and the shaded window cast them in the filtered light of the weekend afternoon. There remained a louche, laziness about his movements, reminding her of a cat.

“You’re so fucking hot.” She said his name after, tone heavy with how much she meant it. “Show me everything.”

She continued to watch as his hands went to the band of his pants, fingers undoing the button, parting and pulling off his slim hips. For that he was forced to go half upright. That left loose knit cotton boxers and socks. The consortium of female taste had at some point decided men looked stupid in just socks, but she found this belief incomprehensible. It was part of the cozy, naturalness of real sex and she often made it clear they could and should stay on, a little exertion of her will on his.

There was always the tiniest flash of shyness when he revealed his cock, in this case just starting to stir. Earlier, her body had been on his, her weight pressing his groin and her hand running over the obvious texture of his sensitive nipples under the thin fabric of his t-shirt.  This teasing was an appetizer to him, but she was quite content at the result.

Cut, balanced in size, nested in hair that was the reddest bright on his body, small curls that added to the sense of radiating warmth. She put a hand on his thigh and the other to cup his balls, “I’m going to want you to finish getting that hard for me.”

She liked to watch men. He had a simple technique, out of the ones she’s seen, always a little different, this one being less curl and tickle and more a motion of the hand and fingers,  a circle pulled from mid-length over the ridge of his cock head.

Her cunt gave an anticipatory twitch, hungry.  As she watched she let her palm slide slowly from her collar bone over the swell of her breast, land loose to follow the curve of her shape, “Keep going.”

His muscles began to hold tension, a pull in his belly, a squaring in his shoulders and his face taking on a slight expression of exertion.

“I want you to keep stroking and pulling your cock until you get hard for me. I want to see the first couple of drops of your precum. I’m not going to touch it, this time, but you’re going to come for me, when I say, because I want it.”

He said nothing, but his eyes met hers, cock now full erect in his hand. It was pale and pink, even shaded, alive and warm. She grinned.

“Pull back a bit on the sensations, but don’t let yourself get soft. I want you to draw it out for me.”

He gave a huff of breath by way of answer as he complied. Sex muzzled him as surely as tape over the mouth.  She grinned, nuzzling against the bottom of his ribs with her face and kissing. From there she pressed against him until her mouth was close to his nipple, tongue darting out to flick, and then a second swirl. She knew it was more teasing for him if he could look down and see the dark wetness of her tongue touch.

“This isn’t about you, this is about putting on a show for me. So make those strokes longer, from cock root to tip. I kinda like the idea of you a little frustrated and wanting more sensation.”

Obediently he complied, and she admired just how long his cock got. “You know you’re so fucking big, and every bit of that belongs to me. That’s my cock, mine to fuck and suck and tease when I feel like it. Right?”

He didn’t have any words, so she repeated it again, prompting with a purr in her voice. “Whose cock is that?”

“Ok, good boy,” she purred, “You can go back to touching yourself how you like. Go on and get yourself close, I want to hear it in your breathing.”

He wasn’t a big groaner or panter, just an ever increasing strain, like the arousal was a weight that increased, pound by pound with every quarter minute. She spied a little bit of wet, precum, and suppressed the urge to lick it away.

As he got closer to the moment, his face took on a different caste, eyes widening even as the small muscles tensed. There was a desperation, but it wasn’t time yet. She wanted him to feel like they was no choice but to come for her. “Almost, ease off again for me, I like watching your take your time with your cock.”

While she talked, she had a hand on her own groin, pressing through the layers of her drapey cotton skirt and the barrier of her panties.  “Fuck yourself for me. Yeah, ok, break’s done, get yourself close again for me. Do you want to come?”

“You do want to come for me, don’t you? You want to let go?” She licked her thumb and then swirled it over his nipple in a spiral.

She could tell he didn’t have any words left, just the sensation.  “Come for me, baby. Your balls are all tight, I know you can’t help it, you’re gonna pop, and then I’m going to lick up every creamy white string from your belly.”

“unnhhnrrrrrrrr…!” It became a growl. Her smile was full teeth, even as she pressed harder and ground her own clit.

The growls continued, instinctual, as she watched the first pulse of white fountain, spurt after spurt.