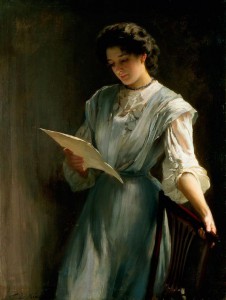 Female dominants get messages, partnered or unpartnered, searching or trying to hide. In honour of the recent batch of crazy letters and threats, I’ve created a quick guide for new femdoms for signs you should save yourself the trouble and delete the message now. If any of these nine behaviors have come up in the guy’s efforts to talk to me, I’ve never found any good was going to come out of the interaction.

1) Tries to rapidly escalate or control the conversation medium. If you’re on a dating site, they try to push for an in person meeting immediately. If you’re online, they try to get you to give them more contact information right away or keep pushing to switch to another medium, eg going from email to chat, or guessing at your geographic location (such as “did I see you on X street?”)

Why this is bad: Taking the time to feel comfortable is important when you’re getting to know new people, among many things because it lets you figure out who they are on your own terms. Someone who pushes you this way doesn’t care about this and may even want you to disregard something about them you would pick up on if you took your time.

2) Instantly appears enamored of you and/or tries to force a D/s dynamic right away. They greet you with loud and hyperbolic praises, more so than simply a polite, respectful compliment or two – or they start trying to sub to you right off the bat. Alternatively, within a handful of messages you are, according to them, the best person they have ever met.

Why this is bad: An actual attachment to someone takes knowing them – anything else is fantasy they’ve created in their heads. The problem with being put on a pedestal this way is that if you do anything to topple off your perch, you are put at risk for them not being able to handle reality.

Why this is bad: If we were a few decades ago, the lack of material available would make this attitude slightly more forgivable. These days, the sheer wealth of knowledge presented to the newly self identified as kinked means that anyone with an internet connection can find scads of teaching resources. Therefore it shows a disproportionate willingness to let what they want to be true be the case, and more to the point, they’ve absolved responsibility for themselves.

4) Instant or whirlwind courtship commitment. From the word go they are already sure you are the one. They will relocate, marry you, whatever. Their heart is, according to them, true, and belongs only to you. This is probably combined with #2 – in their eyes you are the best and most beautiful and they want your collar NOW.

Why this is bad: Once again, this person is chasing a feeling more than trying to have a meaningful, nuanced relationship. This also tends to be a pattern in people with personality disorders- super epic passion followed by a crash when they stop being able to sustain things.

Why this is bad: Being forced into being a fantasy prop is a perennial problem for femdoms, and also this sort of nonsense is proof of the person’s willingness to lie to you from the start, instead of saying “I liked what I read so far”.

6) You have a really bad feeling about this. Something feels off, but you can’t put your finger on it and you feel bad about not giving them the benefit of the doubt. Maybe they are just awkward or have a socialization disorder?

Why this is bad: Trust your gut. Women, in particular, are taught to disregard symptoms of dislike and make nice and forgive. Protect yourself. Even if you feel like a meanie – adults with social problems aren’t automatically allowed to put you at risk by trying to be open minded and most actually awkward people are balls of blushing apologies, not the type of people who make you feel itchy under your skin.

7) They have nothing nice to say about other people. All the other femdoms were findoms or fakes. They were crazy or ugly. You’re different of course! Not like their bitch ex- or their wife who’s a prude, their abusive parents or shitty boss.

Why this is bad: Everyone knows some bad people in their life, but if all the people they know are horrible by their description it’s statistically more probable they are the problem. and cross them and you will be just another fake who hurt them, according to what they tell the next woman.

8) They start telling you what to do, or expressing really strong preferences about other people or you. Maybe it’s phrased as introducing themselves, but they want to make sure you know that they like a particular thing, for example they start worrying about you getting fat or thin, they make appearance based suggestions or offer unsolicited critiques.

Why this is bad: This person is a controlling jerk who thinks they are just being honest. they won’t care about you except such that they can cram you into the shape they wish you were.

9) They want to talk about what gets them or you off in detail right away. You get asked to describe scenarios, share your fantasies, or they just won’t STFU about co-eds in ballet flats or busty trans leatherwomen.

Why this is bad: Wanker! This person is going to try to use you to titillate them. If their fantasy talk is all you want, good, but don’t expect things to get better or to focus on anything other than immediate gratification.

With this sort of winnowing in mind, consider it a chance to save your valuable time for only the worthwhile people. And remember, you don’t owe anyone a chance more than you deserve to feel safe.

What did I miss? What are your favourite signs that things just not going to go well?