One of the biggest barriers for new femdoms (and women who are giving this a try) is that the topping side of dominating people can seem hellaciously intimidating. What if you get it wrong, will the bottom be seriously hurt? Will he laugh at you and take away his submission? I blame existing dominants, who often base their authority on how well they hit and tie. In some cases, of course, kink skill takes time and practice. Bullwhips and needle play require more prep and know how, as well as specialized equipment. But spanking is something anyone can do and carry very little risk, particularly a bare handed spanking with an open palm. 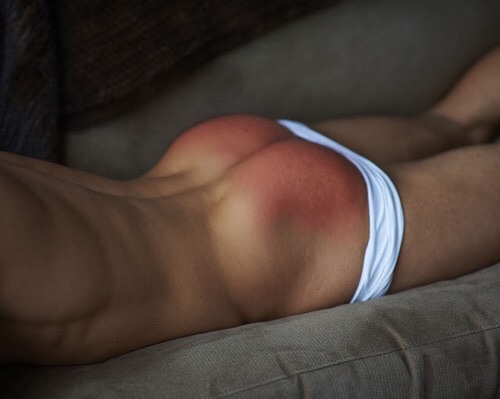 Why spanking and how does it work?

A human butt is one of the more resilient, padded parts of the body. Cushioned and bouncy, it offers a wide surface area for striking while keeping all the important biological bits tucked deep out of the way. As well as a safe target, many people associate spanking with being in a demeaned, vulnerable of juvenile position. Although people in the 18 to 35 generation may never have personally experienced a beating in the hands of a parent, the idea of being bent over and smacked is deeply embedded in popular culture, as a minor form of violence expressing the authority of the spanker. Besides, we sexualize butts, and spanking is touching butts.

For kink purposes, there’s two kinds of spankings, a fun spanking that works with the “victim’s” natural tolerances and a mean spanking that seeks to exceed them (in a safe fashion of course!). In this case, don’t confuse tolerances for limits. Limits are how the bottom protects you from being arrested, while tolerance is how the spanking effects them in relation to how they experience pain. So how do you make sure everything’s hunky dory?

If you’re a newbie dom, maybe your bottom has also never had spanking before. Or, maybe if he’s new to you, you’re not sure he understands what you are capable of dishing out. I’ve already established that I’m a big fan of consent. Don’t hit people unless they say it’s okay, and understand the ramifications of what they agreed to. That established, what if the person doesn’t know what their finite limits are yet? Nobody wants to initiate a grandiose walloping and have the bottom start screaming “Pumpkin! Pumpkin! I don’t consent!”. Have a conversation about limits and kick any new partner who tells you they have none out of bed.

But what if they’re gung-ho about it, but this is virgin territory? This is the main stumbling block for many kinksters. Most people come into this with a bunch of sexy ideas, some of which are going to turn out to be perverted brilliance, but many of which will be improbable, impractical or nowhere as hot as they seemed in real life. On that line, launching a full scale assault on their ass may sour a spanking victim- if this is primarily your idea you want to be able to ease the bottom into it.

I’m a big fan of using the pain scale numbers system, because you can’t get simpler than that. During your first spanking session, task the receiver to rate your hits on a scale of 1 to 10, with 1 being “did you touch me?” and 10 being “sweet mother fucking christ auugh I’m dying.” For a bare handed spanking, many people can’t even get past 7. Regardless, start with your lightest possible hit and work to establish your mid-range. You will probably discover one other fun fact: people’s pain tolerances shoot way up when they are aroused. Thus his tolerance is going to be a bit wibbly. With warm up, you may exhaust yourself long before he’s ready to call it quits.

Warming up (if you want).

A warm up isn’t just for sports. By starting incredibly lightly, you prep your partner for an easier ride and they will be able to take more spanking over all. You might skip this if you are both into mean and cruel, but the warm up can also help the guy you’re whacking slide into a subby head space better than an abrupt full force thump.

As with testing their pain tolerance, it’s all about starting small and light. Use little pat-spanks like you are gently tamping something down or smacks through clothing to deaden the blow. These should be placed all over the surface you intend to hit. This has various explanations, but starting this way increases blood flow to the area and starts stimulating the victim’s nerves so that they will release various happy endorphins and adjust to ignoring all but the heaviest sensations.

With a bare handed spanking, you know your bottom is ready for more when the area is getting flushed and may have a bit of warmth to touch. If he’s a saucy sub, he may even be trying to rub and buck against your hand for more.

I’m mentioning this because your arm is going to take just as much of a beating as his butt if you stick to palm only. To increase your endurance and get the impact you want, your your hand to be loose and fairly flat. Cupping your hand will make prodigious, loud smacks but do very little damage. A tensed hand will hurt you more than you hurt them and will do not one lick more damage.

The amount of force you use comes from two pivots. Gentler spanks are only a simple wrist flick. For more omph, use the weight of your arm, as swung from the shoulder, but keep in mind that the more wind up, the more tired you will get. Be a practical top and use the minimum amount of effort you need to get the reaction you want.

A glancing blow will provide more sting, while landing a solid hit is more thud. for the former you are using a brushing gesture, like you are skimming, while a thud would hit as if your were applauding. Go ahead and mix it up- your bottom’s reactions will be the best teacher for what they like. I find, however, that mixing in the occasional solid whack with milder hits around it keeps them on edge.

You really can’t go better than the instructions in this diagram- it’s gone the rounds of tumblr but it covers everything you need to know. 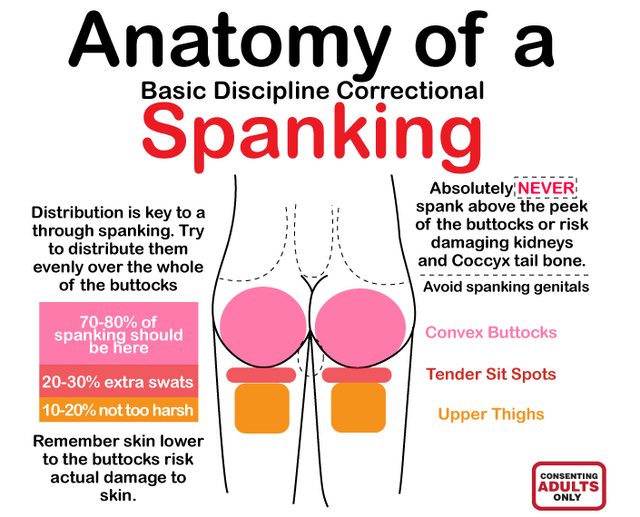 How to position the bottom

The main rule is whether or not the bottom is comfortable enough to sustain the pose and you can reach him. You may want to position the guy on top of furniture and add pillows to raise him. Although basic, position related discomfort has, in my experience, been the leading cause of unplanned unpleasantness in my scenes.

OtK (Over the Knee), is the subject of a fetish in its own right. Assuming you have sturdy legs, sit in a solid chair, or on a couch/bed, bend the bottom over your lap and go to town. You’ll be able to land blows with one hand only, but you can use the other one to hold him in place on your lap.

With a guy, assuming he has the more typical cock and balls arrangement of the male gender, you can trap his dick with your thighs and squeeze to tease. On the other hand if you have less than sturdy thighs or a hefty victim, otk might not be for you.

This pose makes aiming challenging, except for the lightest of swats and will tire out your arm very quickly, as well as requiring more effort to aim. You’re going to need to do all the swats horizontally rather than vertically. Honestly I suggest this one is better for implements, which require less effort for damage and give you a handle to work with.

If you must do standing, what you can do is get him to place is palms flat on the wall and step as far away as he can while holding that pose. Because of the way his centre of gravity works, until he steps back towards the wall he’ll fee at risk of toppling over if he moves his arms in reaction to the strike. Also is sticks his rear out for better smacking.

Lazy for him, lying on his stomach means you can tuck his gentleman parts well out of the way, not worry about his back or knees. I like to do this one on a bed, as I can sit down next to Wildcard and wallop his hind quarters from above. It is inevitable (if sex is part of your dynamic) that bed humping will happen and can be arousing to watch.

All fours can be very visually arresting. Everything is presented on display and there’s a potential humiliation aspect in making him hold the pose or even arch his back a little to round out his butt. Plus you can reach around to tweak his arousal. for your enjoyment or to make him be able to take more hits

Unfortunately there’s three issues: knees, back and balls and balls. In the former two cases, unfortunately grown ups have health problems. Our joints are often fucked, and refusing to acknowledge that may lead to the bad kind of ouchy. Use a pillow and be aware that moving and stretching mid-scene can spare you days of discomfort. In the case of his balls, unless CBT is part of the plan, be very aware if he’s dangling or tucked his kit because it will be easy to whap him but good in a mood ruining way.

Legs in the air, lying on his back:

I have never, in my life, seen the “diaper” position be anything other than a heavy nuisance. Unless you are indulging a specific fetish or using a hoist, ain’t nobody got time for that.

Don’t forget that a spanking is also an opportunity to do other things. Caress and squeeze your victim’s butt between hits to make them feel their inflamed tissues (and possibly inflame some desire). Use your fingernails dragged over their skin to change up the sensations. Bare handed spanking can be used as a warm up to an object, or combined with any kink activity you like, from butt plugs to ballroom dancing.

One popular spanking game is to make them count off the strokes. A lot of fun can be had by making them count in a more complicated way, such as in another language or by multiples of three, exponentially or in a second language. spanking can also be part of an extended dynamic, for example paddling them but good before going out to dinner and watching the feel it for the rest of the night.

Aftercare plays two roles, a psychological re-connection and grounding, and a check in to minimize post scene damage. With a barehanded spanking the bruising won’t be too intense, but in addition to the usual aftercare options including cuddling, talking, snacks, giving them space, etc… you can run an ice cube or a cold compress over their rosied cheeks.This will somewhat relieve any bruising the next day as well as stinging.

The gorgeous butt headlining this post is the work of Mariano Viavanco and has been doctored to give it a rosey glow.

The diagram is part of a larger series- if you know the artist I would love to attribute it correctly.

12 thoughts on “How To Give A Bare Handed Spanking”