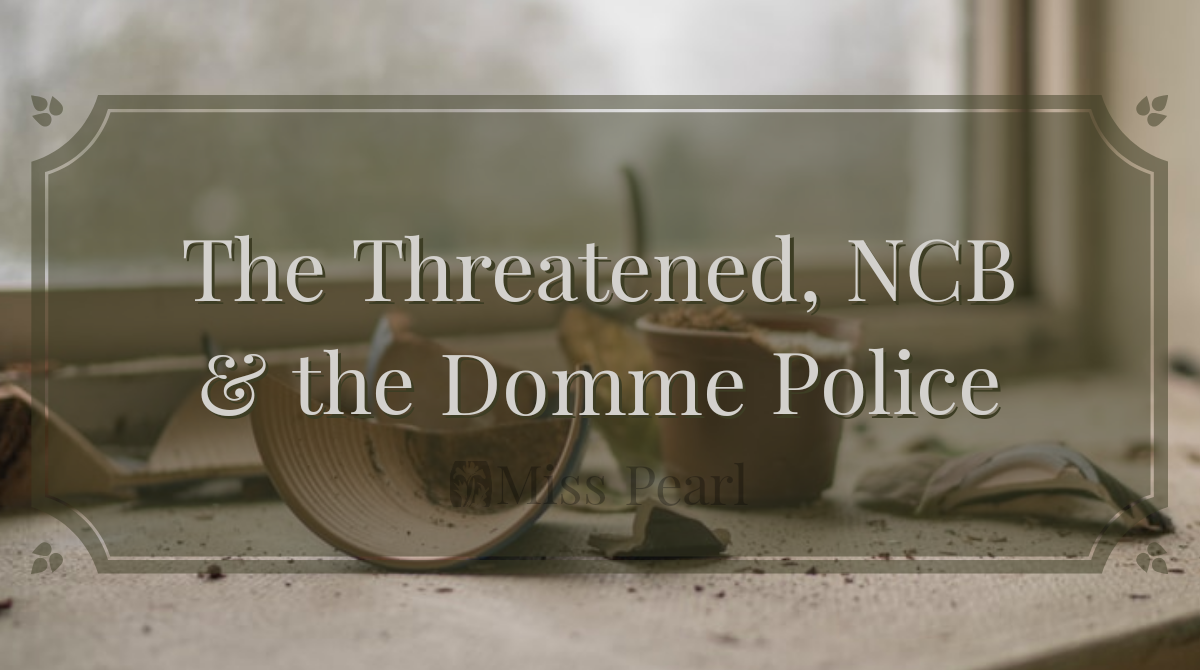 I have a person I know in real life, who is both a professional and lifestyle domme. Since there story is theirs I won’t screen shot it, but I will use the situation as an educational anecdote.

They (the dominant) were doing an AMA as part of a friendly FB thing, with a bit of an educational bent, when Chuckleface slides into the comments and starts picking away at stupid shit- whether a drink was domly enough in her video, etc…

This is, if you are a female dominant, just par for the course. True, male doms occasionally deal with someone trying to get into a weird alpha slap fight, but alongside the regular inbox wankers wailing for attention, you get three different kinds of dingdongs: the Threatened, (NCB) Non-Consensual Brats, and the Domme Police.

Among the Threatened, the guys who do it would tell you it isn’t about gender at all, or they would vomit out some sort of biological essential garbage about the body mass differences. The latter is bold of the sex that has their genitals external to their body. These guys actively seek out any claim a woman might have to even limited power or authority to be triggered by it.

Then, like a particularly fragile masculinity based sea cucumber doing a last ditch fear reaction, out comes their misogynistic guts. In effort to take you down a peg or two, they vomit up everything from out of context accusations of being a man hater, moral railings about your Jezebel ways, to the same tired tangle of speculations on your age, physical body, incompetence, etc…

In their mildest form, the Threatened are violently defending their idealized perfect fantasy from icky real women who don’t fit, but most of the time they just feel so socially insecure that they calamatize that any woman who doesn’t bend to them unmask their soft mess to everyone.

NCB think if they piss you off you will “make” them behave. The best meaning imagine they are being seductive and providing enthusiastic consent by being as unpleasant as possible, while the worst lean into their fantasy over you, seeing your feelings as just another tool to get them where they want to go.

This adds a bonus scary problem if you have disparate sizes and physical resistance. While some dommes, by confidence, personality, or being skilled and swole, can safely take town someone either bigger, or sometimes just physically able enough to pose a significant challenge, this puts you both at risk of an injury neither of you planned or wanted to consent to.

This isn’t, of course, the push and pull of a more primal dynamic, or the well established sass of a wanted fight. NCB are not a “bit of spirit” to spice play. Nor are they the healthy ability of a sub to say no at any point. NCB are a relentless push that thinks dominant consent doesn’t matter, and often refuses to acknowledge how much their own consent is actually supposed to power a dynamic.

At their best, NCBs just need a clue, because they don’t realize they are missing a piece of how kink works. However, NCB may even be a sad reminder a sub orientation doesn’t stop you from being abusive, verbally or physically.

Sometimes, mind you, the Domme Police would tell you a challenge is all about making the dominant prove it, because they feel they are the sacred heart testing scales of truth. Only, rather than your heart weighing less than a feather, it needs to weigh more than a pair of floggers to be pure, and there is no cute crocodile to pet.

Although less explicitly abusive than the often bordering on incel, glass Alpha types of the Threatened, there’s an implicit destructiveness in the gatekeeping that is no less corrosive. In some ways I hate these people more than either of the first two categories.

Who could blame a new domme, or a tired one, for agreeing they don’t fit and looking elsewhere?

Unlike the overt explicit explosion of the Threatened, the problem with these folks is they are masters of making their illogical challenges a test of your mastery. Their self justification is often just the regulation of fakes, and exploitative types and the more adroit trick others into nodding along in the name of “standards”.

You are not, to wander into other, Northern mythos, Heimdall on the bifrost, guarding betwixt sacred kink and dull, profane vanilla. You are Nidhogger, the dragon gnawing away at the roots of the World Tree, destroying a nurturing growth meant not to contain just kink but the entire connected worlds that we travel in and out from to be part of the whole person and larger community.

The furious energy the Domme Police expend demanding, testing and frankly preying upon the newer or trying to take (always female) teachers down a peg or two is sometimes even a mark of a more cowardly predator, the mask of the first type I mentioned.

Being the Domme Police, like unsolicited NCB behaviour, is just an effective cover to lash out.

In the example of the guy that inspired this post, the unmasking of his past as a serial harasser in other, non-kink communications was swift (and very public) and the handling by the domme presenting her AMA was able to deal with him with patient skill but…

…imagine if femdoms didn’t have to wade through three different flavours of (usually men but not always) idiots trying to actively make this harder for us?