Do you have any advice for someone who’s looking to become a slave to a woman permanently? I’ve been reading stories for a while but I don’t have any experience actually finding someone who might be into these kinds of things, and even tho I’m seeming upfront right now I’m actually quite shy. You seem like you know a lot about the psychological aspects of femdom in addition to the fleshly pleasures, so I was hoping you might be able to give me some advice on how to find someone who’s interested in owning a slave completely, not casually like on some personals sites, but complete power exchange and total mind and body fuckery with no going back. I gather that you yourself have experience in such things, and so my heart is hoping that you’ll be able to help me. I understand if not tho, and either way, keep on writing the awesome stories.

Gee thanks! I’m always glad to hear from a fan! 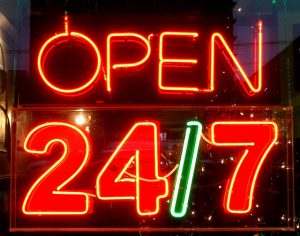 The thing about 24/7 power exchange is that you need to ease into it instead of expecting it to appear overnight like mushroom in a lawn or stumbling over a perfect dynamic ready made, and it takes a lot of work to sustain a dynamic like that from two different people. Meanwhile, asking for a heavily involved power exchange BDSM relationship is like asking for an intense and torrid vanilla love affair- it’s not just a matter of finding people who are into that, but building a life that works with what is an incredibly time consuming endeavour and finding someone who is into it who you also have incredible chemistry with- essentially its the difference between finding a girlfriend and finding  girlfriend who is into elaborate and absorbing love displays with fireworks and rose petals and poetry and crying and declarations of eternal passion.

Among many things, no relationship can really function in the long run if it doesn’t make allowances for the fact that you still need to interact with the outside world and that no matter how awesome your dominant is, in order to be able to consent you still need to be a functional adult which means you can never really let go of the other bits and pieces that make you a whole human, like your relationship with your family, or your hobbies and aesthetic preferences. This can be a bit of a let down if what you want is a self negation fantasy where you permanently lose yourself in the feeling of submission- sorry, that doesn’t really exist in a prolonged fashion and completely abandoning your identity to be someone’s sub makes for a very boring, very needy submissive. Rather, the people who make it work over the long haul tend to be the people to where there kinks are a very pleasant constant sense that their connection with their dominant is entwined into their day to day life.

I’m very loathe to tell subs to think about what they are going to bring into a relationship (because it all too often slides into telling male subs to open their wallets or to expect to pay for play with service), but going about embarking on something super intense is a good time to get introspective. First of all you need to ask yourself a few things:

1) Am I envisaging a particular scenario and particular kinds of play? A lot of people tend to presume that their partner’s default fetish menu will naturally match up with there’s. It’s all very well and good to set out to give yourself to another human being, but, for example if you were expecting to be a demeaned house slave kept in cuckolded chastity and she wants you to be her decorative stud who tops and fucks other men for her titillation, you may have a problem with the disconnect between what you want and being in a state of actual submission. How do you plan to handle that?

2) Do I have any existing experience what so ever trying this, or do I just think it sounds amazing? The engine behind a D/s relationship is the emotional and physical chemistry. That doesn’t just mean that someone gets your crank turned, but that you spark off each other well. On the other hand, a lot of people embark on kink expecting that they will automatically make the other person feel submissive or dominant, or that their particular desires will translate well where the rubber hits the road or, shall we say, where whip meets flesh. Easing slowly into things also helps deal with the learning process as you need to figure out each other’s submissive and dominant triggers.

3) How are you going to look after yourself and your other responsibilities, as well as your partner? In this fantasy, are you the kept (wo)man? Are you going to marry your dom? What do you do if the relationship breaks up? Humans live for a long time, so that’s decades of relationship and have to think about things like retirement savings plans and cholesterol levels. There is a dearth of independently wealthy dominants with pre-built basement dungeons, so how does this relationship fit into your life?

4) What do you do if it doesn’t work like you planned? It’s 2:00 PM on a hot Sunday afternoon and you have mild food poisoning and you just found out your father has cancer with an unknown prognosis. Your dominant wants you to put on a cam show and all you want to do is find a quiet place to sulk until you decide whether or not you are going to puke. Punishment, which you hoped would snap you out of your funk is just *annoying* on a visceral level that makes you want to snarl. Now what?

Or imagine this- Three years into a relationship with a dom of your dreams, a drunk driver hits her. Miraculously she survives, but with a brain injury- she has motor control problems on the left side of her body, persistent concentration problems that cause significant impairment and other lingering health issues that mean she doesn’t have the ability to be the sort of dom she used to, and indeed needs help with day to day functioning. Do you stay and help her or are you now a single sub?

Or possibly- After your mom’s stroke, someone needs to make medical choices for her. she’s contrary and difficult to deal with but you’re the designated next of kin. She definitely does not want your dom deciding a care plan for her and expects you to step up and make more time for her in her final few years. Does this break your dynamic?

But outside of the stuff you have to think about, finding a dom who is into psychological play and more prolonged D/s is something you’ll meet through the same ways you find a casual dom, and you’ll probably discover it through “casual” play. If you are less about the whipping and more about the feeling of submission, you can find people who are into that as well as long as you know what to ask for (for example that you are looking for rules and restrictions).

Another phenomena that you need to honestly address is the “only submissive when aroused” thing. This gets used as a pejorative description, but it’s a valid form of sexual expression. If you’ve never done prolonged D/s you want to take a serious look at your kinks and decide whether the mundaneity of 24/7 is what you want or if you just get off on the intensity of the idea.

The other thing you’re going to have to come to terms with is dominant fallibility. A lot of BDSM fantasies are built on the dom having a stacked deck- their sexual allure, cleverness, emotional control and resources allow them to overcome the sub. This is a hot fantasy, but like the independently wealthy dungeon owner VS the dom-with-a-job, real life dominants are humans and power exchange works a lot better when you don’t need the dom on a pedestal for real. You can certainly like and admire them, but Wildcard still needs to be able to sub to be even after seeing me be sick, cry, scared of a horror TV show, fuck things up, be unreasonable, etc… If he needed me to be perfect I could probably fake it for a while but then I would simply explode into a pile of fail after a month or two from the strain, and that would be the end of that.

As far as ‘no going back’, there’s two ways that works. One of which is simply the long term impact any human relationship has on people or on association based training- for example learning to match one stimulus with a feeling through ongoing conditioning. The other sort of play I think you might be hinting at is generating a sense of risk, for example what people who roleplay or act out blackmail fantasies to have a sense of consequence for messing up.

Playing with ‘real’ forfeits is like playing sans safewords- it’s, to say the least, edgeplay for pretty much everyone and a hard limit for many people, among many things because of the legal impact on a dominant if the sub changes their mind (as well as the psychological effect on the dom, most of us having perfectly operational empathy).

Consequences need to take into account the consent of the people who may also be effected- for example its all every well and good to threaten to tell dark secrets to an employer, but the employer may not actually want to be that involved in your sex life. If you want to be forced you will need to think up something with your dom that you both like- for example holding your childhood plushie hostage (nooo, not Mr. Bunbear!) or making you pay massive forfeits for failure, like a punishment you genuinely hate (or be presumed to be ready to quit the relationship if you resist that).

Hope that gives you something to think about,

Got something to ask Miss Pearl? Hop over to the contact form and send me an email or write to me directly at: miss.pearl.chain@gmail.com