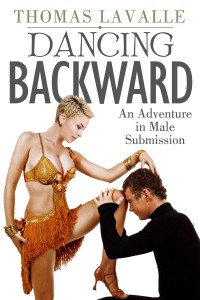 Dancing Backward: An Adventure in Male Submission by Thomas Lavalle

Some of this was simply it not being my way of expressing my F/m kink, but it had a lot of oopsies and pitfalls typical of the genre- as much as I hate to pillory the creative output of other people, this is precisely the sort of book that makes it hard for women think they would enjoy being a dom, and indeed represents male submission as something pathetic. On the other hand it’s one of Amazon’s more popular femdom novels, so if my review is scathing, I’m sure the author will dry his tears with a handful of the royalties he’s earned.

The most glaring problem was that I never got any sense of why the couple liked each other. An interesting premise, essentially of a gender inversion 1950s marriage, turned into odd abusive weirdness sans any sort of context- our hero Christopher is essentially an ambulatory submissive erection, while his wife, Kelly, didn’t really have any characteristics other than hawt n’ dominant- her G cup breasts had as much personality as she did, while she groped about the femdom cliches with inexplicable motive, coming across as less kinky and more that the universe had dictated this was how things worked because the author said so. Really, you know you’re going to have a bad time when the description blurb calls the femdom “spoiled” and “bossy”. About the only moment she seemed human is the vague mention she had decorative ballerina figurines- otherwise I got the impression that literally any idiot who met her minimum threshold of attractive and she could push around would do as she was just a culmination of everything the audience is supposed to find attractive crammed into one barbie doll shaped carapace. She had no beginning and no end, just ambition and a sense of self importance that came from no place other than narrative dictate. Hell, when the novel opens she doesn’t actually appear to have any close friends.

The writing honestly, is good at least as sketching out the male protagonist as a believable person (albeit a realistic waste of space or a victim, depending on your reading), but as a female dominant I found Kelly repulsive- angry and condescending, with a side order of female superiority wankery and nothing to back it up other than that she makes gobs of money. The side character, Carmen the Cuban, was actively offensive, a fetishists idea of what a Hispanic is, making sure you knew Ai AM EL SPANISH! every other sentence, in a way that made her feel like Dora the Explorer’s sociopathic cousin. None of the female doms made me want to be them or even in the same room as them. If a guy handed me this book and asked “can we do this please?” I’d probably run away.

And then there’s the whole subject of the weird abusive stuff, which was encoded into the universe such that the audience was supposed to see the aggressive mistreatment of males as not grounds to call the police, but just vaguely titillating. I’ll take the time to say this now: Mr. Lavalle, nobody this side of the ’90s says “you go girl!” unironically, and certainly not regarding CBT or how the only true way to deal with life is to dom the lesser menz. The only people who are still using that tired little phrase is the sort of persecution complex MRA who never actually interact with actual women and write eight page screeds on why women are out to get them.

As a writer of non-con who gets off on rape as a concept, you think I’d be all on board with the setting’s darker side- after all, I am quite the sadist. However, the rapey nonsense is all over the fucking place, and not even particularly empowering or just a sadistic fantasy for women- for example just incidentally in the background, Kelly worries about the impact on her career of turning down some random wealthy dude. This was forshadowed as her cuckolding partner in the next book, without examination of how creepy it is that now the guy is aggressively sending her mash notes bout how their hookup is inevitable. Of course, like any porn dom, rather than, you know, getting off on male submission, she’s written to actually want a Real Man TM, like Stalky Pants McSouthAfrican and this forceful attitude is not time to speak to HR, but a rare moment she seemed to respect a male.  Do. Not. Want.

Meanwhile Kelly, herself, also comes across as way less domly and more abusive. She isolates her husband, banning him from friends and hobbies. Even before they bring in the whips and chains side of things and she’s waffling about with a pure power exchange relationship, she mentions offhand that she rarely had to slap her husband as a sign of his goodness. This is supposed to be a normal relationship up until that point. Heterosexual dudes in relationships reading this, if your female partner slaps you and it is not part of a consenting dynamic or to get your attention while you sleep walk off off a cliff, that shit is not okay.

And then when she decides that they are going F/m full bore femdom, of course she doesn’t ask because in this universe male subs are just defective men who will go along with any nonesense as long as the woman forces them too. Half the time she’s mumbling about female superiority, the other half the time she’s debating who will actually fuck her now since a sub guy won’t do. Our hero devotes a extensive amount of whining and carrying on about how he’s sooooo emasculated, and yet as much as they started out exploring an inverted 1950s dynamic, much is said about how useless he is as a housekeeper, etc, etc…

Which is back to my point, Kelly talks about how her Christopher is ‘sweet’, but all he does is either fail to keep house (so she can punish him) or whine about how terrrrrrrible this new thing is, never showing an ounce of romantic initiative, agency or creativity. We learn that when he met Kelly in college, he dropped out of his graphic designer program a few credits shy of graduation to be her full time house husband, and never expressed himself creatively again. He does not turn around and flourish in the home. Instead, he becomes this useless lump who actually hates housework and does it for fear of punishment. He does not act remotely emotionally fulfilled by a life of service, but neither is he good enough at it to make me feel like Kelly’s getting a good deal- instead she spends much of the book pissed off that her partner is dull and clingy as wallpaper paste. Her solution, to transition from domestic D/s, to full sadomasochistic BDSM, feels like more effort than just hiring a damn maid and throwing him out on his ear.

If you are a sub guy into being treated badly (at least in fantasy) with stabs at SPH, domestic service, feeling emasculated by obedience, and the idea that nursing at big boobs are hot, you will have yourself at least one fantastic wank reading this. If, I suppose your SO lets you. Although if you have an SO, you’ll know this is pure fantasy, and one hopes your relationship is a lot more nuanced and healthy than the nonesense written in here.

If you are a dominant woman, you will come away feeling vaguely insulted and disappointed that once again, your kinks are simply not considered to matter when you can be used as a fantasy object. 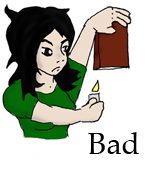