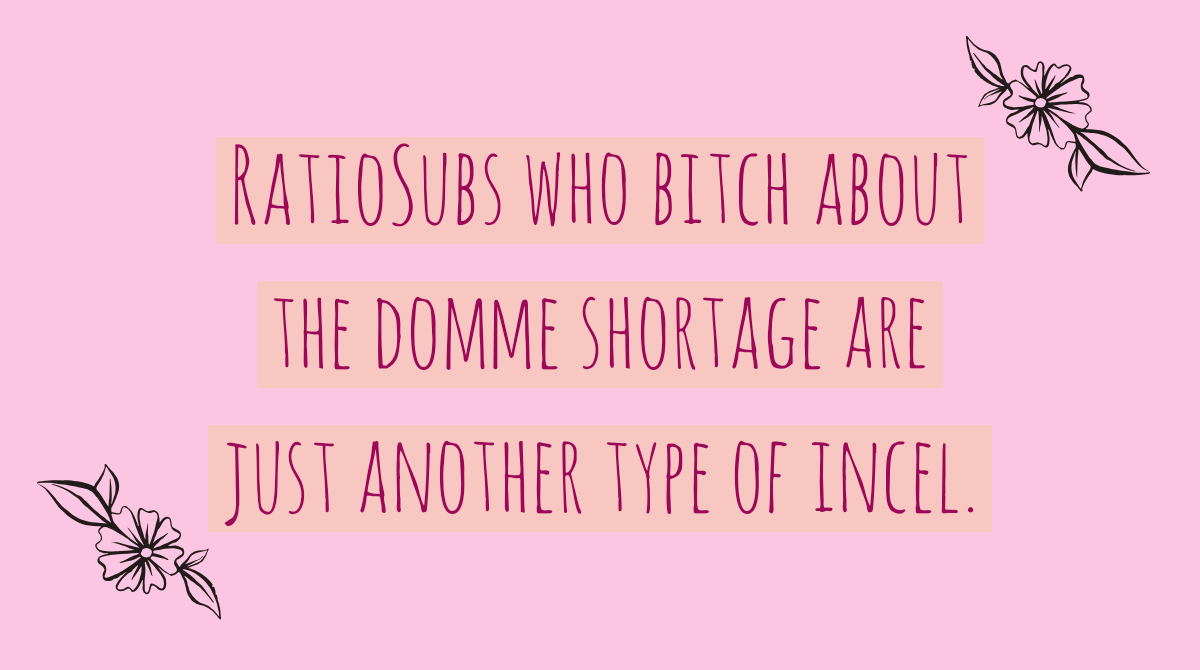 Do they google the problem? Of course not. Do they ask other sub men in relationships how they got there? Nope. They want something like the weird pneumatic sex tube tinder out of Logan’s Run.

They are boring as hell.

Learn to hold a fucking conversation. Learn to make your appearance visually interesting. Be a potato, sure, just try not to be an unpeeled raw potato on an otherwise empty plate.

At my most sympathetic I blame being raised a boy, and thus actively discouraged from considering anything girly. A sheltered young 20 something can be forgiven his innocence. It’s the same learning curve a baby domme might go through when she discovers that the zipless free labour promised by service subs isn’t actually reliable enough to make her feel powerful.

In short, a level of empathy that’s stunted to protecting the self onto others. Sometimes it comes out as unsolicited nudes or offers of service tailored only to the guy’s pleasure. Sometimes it’s as easy as being bewildered that women have different safety concerns and relationship priorities. Either way, when these guys complain about the lack of dommes, they are pretty explicitly defining dommes in terms of their desires, not hers.

More Variations of the Big Three

But I can’t find any femdoms, and I’m not an incel!!

Great. What separates you from ratio subs is that you can understand finding a compatible partner takes time. Being single and looking is not the same thing as maintaining behaviors that are the kink scene version of a fedora.

As long as you acknowledge that everyone has challenges, it’s ok to feel a little blue. Just like, quit the woe is me no dommes shtick and you won’t be an insufferable mess as well as lonely.

No, everyone who has a viable relationship gets picky. If you really weren’t picky, things like sex work wouldn’t cause you to screech it isn’t reeeeal.

You just like shitting on men for being weak, you misandrist!

No, honey. I have hammered out post after post of helpful, patient advice on how to find a mistress. I am going to take a good faith interpretation that you just have a hard time seeing humans suffer, and I will be clear with you: letting men do those three things I listed keeps them lonely and isolated.

To go out and express your desires, as a submissive man, is fucking brave. You are running against gender role training where being openly weak, vulnerable or wanting to have either of those might even get you attacked.

But as long as you keep telling dominant women they don’t exist, you are shooting yourself in the dick.

Try asking not how to find a domme for yourself, try asking “what spaces do dominant women enjoy being in?” and I bet you will start to find us everywhere.