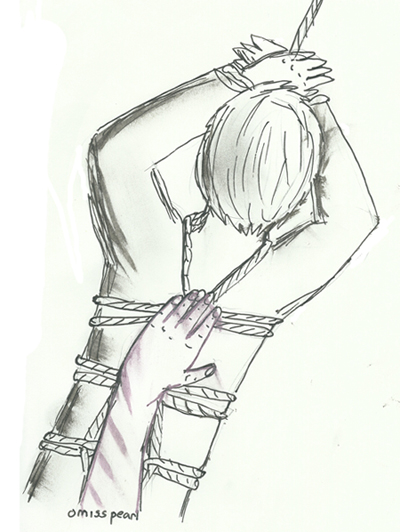 Tantra is a meditative practice using the sex between two people as a transcendence, a way of blurring the self/other boundary. It’s an infectious idea that slithered it’s way, cross colonial style, along with the Tao-ist sexual practices it blends into. When I talk about integrating tantric massage into my bedroom life, it is first important to acknowledge that it is a spice, like cumin and chili and cinnamon, imported and used in ways that the people who discovered it probably never intended.

But sex between humans is a beautiful perversion of a simple bodily function, more than just the raw exchange of genetic information. Leave the instinctual simplicity to fish and cows, even if you are about as spiritual as a rock, we are all deviants. Even the vanillas. You can’t talk about orgasm or romantic love without shades of something bigger than you behind it- it’s the doorway through the profane to the same divine chased with supplication and worship. The same enveloping bigness of Jesu, our Hearts Desiring or Hare Krishna ecstasy spring from a genital, venal root. Why wear robes of priests and clergy and sit in drafty temples, when you can open yourself in the naked comfort of your bedroom? Touch. Taste. Kiss. Torment. Fuck. This is the way we pray.

The first thing, as in an scene at home, I clean. I strip the bed and change the sheets, fluff the covers flat, and knowing that I’m about to get messy, I take a smooth, clean, wide top sheet and stretch it out over everything. I do things topsy turvy, because I am me. Some couples, the sub does the setting of the place. Either way,  the foreplay begins long before we first touch, in thoughts and plans and this preparation.

A lot is said about achieving a submissive mindset. There’s a knack to it, tricks and shortcuts through those everyday fetishes, power symbols and ritual. But when you take on the lofty perch above someone, you take those same tools to elevate yourself. If I am to feel myself and in control, I want the space to be perfect. I want to prepare myself with a shower beating down on my naked skin, washed and fresh, dried with care. The first secret to feeling attractive is to treat yourself like you love yourself, and this is where I start.

In dominance, I bring the comfort I have in my own skin to my partner. I am, when I dominate, beautiful, and I share that beauty with him or with the room. How could I not be, when I am my most happy self? With an audience, I can make them into my tools, adding them to the pull and push on the submissive, or I can block the eyes from my mind, cloaking myself in confidence.

You can see why I speak of seemingly fuzzy concepts like tantra when I talk about my sex life, because the ability to do that is a magic trick that mystifies people. I’ll tell you a secret, my secret of how the trick is performed: bring an utter openness to the moment and be prepared to take what your bottom or sub can give or reject it as suit you.

I started this time a day early, telling him I wanted to give him a proper massage.

I mixed fresh herbs from my window boxes, mint and rosemary, with warm sweet almond oil. I laid out cloths, and my tools: a knobbly thing for working tough spots and glass marbles for the rolling pinpoint sensations. I started early because I wanted to avoid surprises, and have things flow.

We had a conversation through my fingers, finding him locked up, tensing at any stimulation. Nothing was wrong, per say, but everything was a little askew We connected through touch, him touching me in return, finding places in my hip that when pressed loosened and turned to pleasure. Rosemary is a wonderful scent, mellow, ungendered, almost musky without being cloying. It suffuses us both, making sure we are on the same page for tomorrow.

Then, Punish Tuesday … Plus Fun

It’s a weekly event in our relationship, half a make-time, half a romantic tradition. I enumerate his sins over the week, count them as demerits awarded under a system decided entirely by me, and then he works them off in a manner of my choosing. Sometimes it’s quick, sometimes it is elaborate. After he’s been under the weather last week and missed his appointed treatment I wanted something a little more intense.

I get home late from work and we check in with kisses, while I cool off from the walk home. Then I tell him to get ready.

His ritual is simple: He lies on the bed listening to soft tones of simple meditative music, settling his mind. He’s knows this is coming, knows I want to make things special this week.

While he settles, I straighten things again, check the toy bag and plan the scene in my mind. I want pain, harder than usual but still controlled, lots of stroking and touching, ropes and endless edging. Almost everything I need is in the bag under the bed, sorted neatly into category- butt plugs, long cords for tying and various levels of scourge.

When he was ready to submit to me, he shucked the last of his clothing, and crawled up to me on the bed, nibbling and kissing. It’s one of the tricks of the energy of kink, that a tiny woman can become big and mighty, and a lean, muscled man who has several inches on me become a small thing I can gather up close in my arms. The armor’s off, the flesh is willing, and the spirit is there to suffer my whims.

I work him into a harness of tight cotton cord, a karada if you are being a purist about terms. Two plain bamboo clothespins are cinching each nipple. They go on easy, but the sensitivity and sensation they add will be important later.

Then I bend him over the bed, setting him in position to receive his warmup, quick this time with my palm to his ass. I’m reading his reactions. He’s a lot more open to me tonight.

Wildcard takes his smack with narry a whimper, but I’m in a mean mood. Occasionally I pause to check the ropes or the pins, and I skim my hand so the smacks land with biting sting. We both feel that heat in our skin, and when he’s gone rosey, I pick the toys I want to use.

Whips, even little whisk floggers, take a bit more know how than a palm to cheek smack, but used properly they are an extension of you. Heck, even when sizing them, a good whip is the length of your arm from shoulder to finger tip, for a natural feeling swing.

Tonight I’m mean and the spoon spanking vacation he’d been enjoying is over. I run through every single one of the floggers, giving him all sorts of sensations- and leaving lurid thong thick red fringes as an aura around the centre striking area. He loves being naked, on display and bound. I’m loading him up with stimulation, the better to make the coming teasing drive him crazy.

Does it hurt? Yes, but not the way a lot of people think, not with the bang of a stubbed toe or other happenstance injury, but with the burn of an athletic thrill. Sadomasochism is one of the finest friends to empathy, as his pain is something I must intimately connect with to inflict. Only when I’ve deemed he’s ready, do we move on.

After I’ve beat him red, he finds himself blindfolded, secured to the bed in tight cuffs. He knows I’ve set a timer, but he doesn’t know what I’m going to do for that time. The harness is still cinched and knotted around his body, crisscrossed over his torso and looped with two cords on either side of his groin. When I first learned to do a harness tie, I was cynical. Sure you can use them as an anchor for other bondage, but beyond decoration, what was the point? I know better now. The least little grab and tug makes the rope carry the sensations all over his body.

I stroke him with oil, pulling and tugging his cock. He gets hard, but more then getting hard, the longer I drag and draw the sensations out, the more desperate he’ll get and the more intense the feelings become. He’s completely helpless- from time to time he’ll get so close he’ll be begging me to stop. He loses all sense of time in the blindfold, something I measure by making him guess the passage of minutes.

I tell him dirty stories and dirty threats, spidering my fingers up his body, tugging the ropes and tweaking the clothespins. At the 15 minute mark I quickly take them off, opening up a new range of sensations as the blood rushes back in. He winces beautifully.

At the half way mark I change his pose. I leave the harness but free his limbs, making him stay on all fours as I wiggle a gloved finger inside him with copious amounts of slippy, clear water based lube. His body is already all yielding, loosened by arousal and submissive feelings, ready for the plug I use to replace my finger.

I already hinted I’m not a purist (nothing pure here, really), but mention it again because I have no compunction against using vibrators. The hitachi, pressed to the knot just above his groin, turns the whole harness into a buzzing, tingling cage.

The hour’s ticked down and he’s so intensely and desperately into it that all the things that normally stress him out simply don’t exist. Sure I could end things with the threat I’m making- finishing up the rubbing and teasing with yet more denial but I feel like ending with fireworks.

I could down those last ten seconds out loud, with him not knowing where this is going, only that he must edge for me. I might ruin his orgasm, or leave him frustrated for a week, but he accepts it because I’m in charge.

As I reach one, I tell him to come. for a good thirty seconds of screaming he does, and the semen fountains in an arc, hitting the now rumpled bed. He lies in a curled ball for several long minutes after.

The connection lasts long after the sex act. Even tonight, typing it up, I remember it with a softness and a smile. He lives in my mind when we are apart, surely as if he were a piece of me.

2 thoughts on “On Tantric Massage And Teasing”