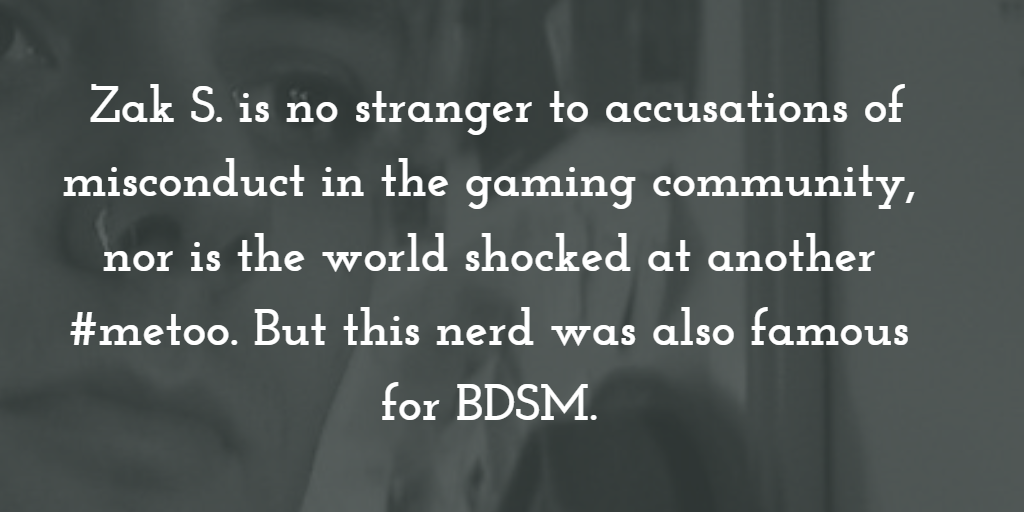 No, not the being terrible person thing, lots of people know about that already. Rather, lets talk about a particularly noxious kind of person who attaches themselves to libertine communities and pleasure parties: the pimp, and how he embodies a particular part of The Problem.

Still with me so far?

If you are involved in roleplaying enough to poke your head out into the larger online community, you’re probably aware of a new suite of allegations against a games writer, Zak Smith (sometimes called Zak Sabbath).

An artist and games creator, pornographer and promoter of adult arts in games media, Zak Smith has been the repeated subject of blown whistles. This time, when a number of his partners came forward and called him out, it seems to have stuck better than two years ago, when a games company, Whitewolf, decided to publically come out and say they didn’t find any truth to the allegation that he liked to harass people online.

The page where Whitewolf defended him is mysteriously 404’d, but their parent company has since put them under greater restriction after a few other oopsies.

At almost a year to people loudly yelling at Whitewolf the games company for employing a known hazard, Zak Smith’s former romantic partners came out and said he abused the fuck out of them, and indeed used them to benefit his internet slap fight habit to help re-enforce his ability to harass people.

And as Zak Smith has publicly bragged about, the reason why this is germane to you, the reader, is that this famous dude also wears his kink membership hat with pride. We’ve given him a platform for us a bunch without telling him not to.

As is the way of online media, Zak Smith has, historically, been a bit of a lifestyle brand, wearing his wife and her adult entertainment work, as well as the bodies of other women attached to him as extensions of that identity. Although also famous for his work for Dungeons and Dragons, he’s particularly attached to the famous World of Darkness games franchise (it’s larp, tabletop, computer games, card games- you name it!)

Right, you say, I’ve burned my copy of Lamentations of the Flame Princess and vowed to never buy his tat again. But other than being same old same old, what makes this case stand out?

So here’s the accusation: the behaviour Zak Smith exhibited is textbook Objectification.

The best archetype I can use to describe Zak Smith is a pimp. Not in the oogie boogie woo woo sex traffickers gonna getcha horror stories, but in the sense that matters, a parasite that exploits the objectification of women while adding back nothing.

He didn’t even make his crap – “I hit is with my ax” and other creative endeavors showing adult film actresses gaming to their benefit, it was another chance to show it off to other straight white men that they could game with their fantasies. He was the Hooters of gaming podcasts, not because the women he worked with weren’t interesting, funny and had valid things to contribute, but because he cheapened all that shit to promote the person he actually cared about (himself) to raise his street cred with straight male nerds.

The problem with pimps, even in the classic sense, is not sexy art and sex for money, it’s that comparatively advantaged people attach themselves to marginalized communities, make it all about them and what they want, and use the fuck out of women, queerness, etc…

Much pixel-type is being laid about people’s feelings on the subject, largely affirming that it past due.  People are doing a good job of Believing the Victim, which is good- means that #metoo business gained a little traction. Normally all this would warrant from me is a few tweets agreeing that Mandy Morbid, Viv Vivid, etc… deserve respect and protection.

But I will add this:

You probably know a Zak Smith or two in your local kink community. Whether the self promoting creepy rope top who leers at anything female; the braying ass who uses being poly to collect humans for coup counting; or the starry eyed munch babbler who thinks that he is a more enlightened being by dint of where he goes to get a hard dick, all these people are particularly notable by the way they dress themselves up in the struggles of other while largely being straight white dudes.

For Zak Smith, BDSM and poly (unicorn poly, natch) provided a convenient smoke screen to own, abuse and modify women to his hearts content. And then turn around and cry sexism and prudery at anyone who disagreed with him. In the case of the Mandy Morbid (and other persons) anecdote we’re lucky enough that she decided to give us her testimony on the way out, he even flat out used her name and social media accounts to write, pretending to be her, because he could hide behind the very real shit she had to deal with because of her artwork.

While he, lets be honest, could slap hot naked goth chicks onto things all day long and merely make a few people who weren’t buying the product anyway harumph. That was a large part of it, and notable in his visual arts, that he depended on naked alt girls and blurred what he could claim (his technical skill) with deciding their voice for them.

Precisely because of his desire to smush together sex and gaming, as well as selling something people wanted, he’s long benefited from being able to call his critics prude or sex negative or even sexist. It’s a complexity that I think my readers are familiar with- the desire to have sexy art that is also ethical.

Zak Smith has not behaved ethically, indeed if you read Mandy’s account you will see him trying to wield her marginalized status like a sword to his, and not her advantage. Likewise he’s not LGBT ally, as her bisexuality was bragging rights and access to more women to him to use and control.  And there in is the stick that I want you, the reader, to note. 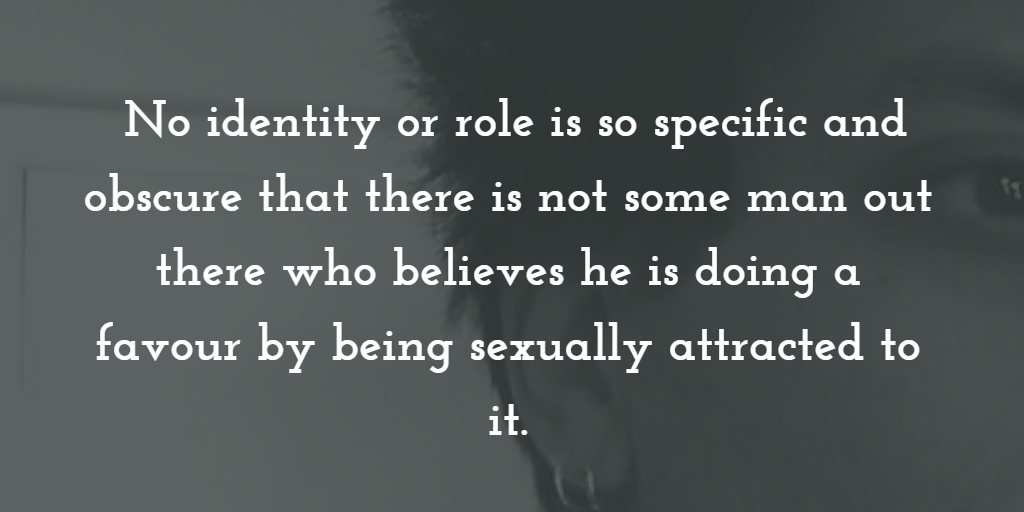 So how do we enjoy sex (and sexy art) and keep the pimps out?

It’s a challenge, the line between painting flesh vases for your dick flowers versus a celebration of humanity in every wrinkle and pothole of human experience. That is also the line in which the concept of ‘attractive’  vacillates between a restriction and a pleasing popular aesthetic. But if this longform blog post gives you any useful take aways, look to who is profiting from the sexy.

Zak Smith, a pretty garden variety creep in many respects, got particular power by not just fucking with the women in his life, but using them as a sales thing for his brand.

Breaking down the conventional sexy paradigm is not enough. No identity or role is so specific and obscure that there is not some man out there who believes he is doing a favour by being sexually attracted to it. Fat women, bi women, pale women, femdoms, women with physical disabilities- it’s not at all harmful someone gets off on that, but the point of harm is as per usual, when some asshole with his dick out wants a cookie in his non-wanking hand and screams like a small child when he isn’t show exactly what keeps the stimulation going.

And if the answer is a troll of a man living a dream that pretty much all popular media uses as comedic shorthand for “lucky bastard” but he is wailing about oppression or claiming to be part of a secret society promising a liberal life  better for everyone, welp, poke it hard and weed for pimps.

My character got gacked and part of the sadness I had to process is this outlet for a part of me to safely let my dom out was cut off. Once again, no place to be my whole self. (Although perhaps I should try living authentically instead of through fiction? The world is not very nice to dominant girls.)

There’s no space to talk about how my fetish self is Queen Elizabeth I not Ilsa Shewolf of the SS. There’s no space to be an insecure mess who also needs to be respected. To talk about your needs as something more than a menu of kinks, or worse, a dismissive declaration that the sub’s needs are irrelevant, is hard. But those options leave my needs unmet.

As I write this, it’s doing that dusting and putting things to rights. I could have done this earlier, taken the bristle brush to the tiles of the bathroom, found the cobwebs in their corners and removed them (I fall on a medium on the neatness scale, much as I am neither extroverted or introverted) but it’s a good way to get my head in order. Momentarily I get to launch into some laundry, again, working to claim my space so I can claim someone else.

Anticipate, court. Seduce. He said that while he’d aware the capacity is there most women just don’t do it for him. Is he asking for the conventional script done well or something else? What is the serendipitous leap that we need, that any couple needs to get that sing and sting of a unification between two people trying to make an exchange of power?